Utility of the Common Bile Duct 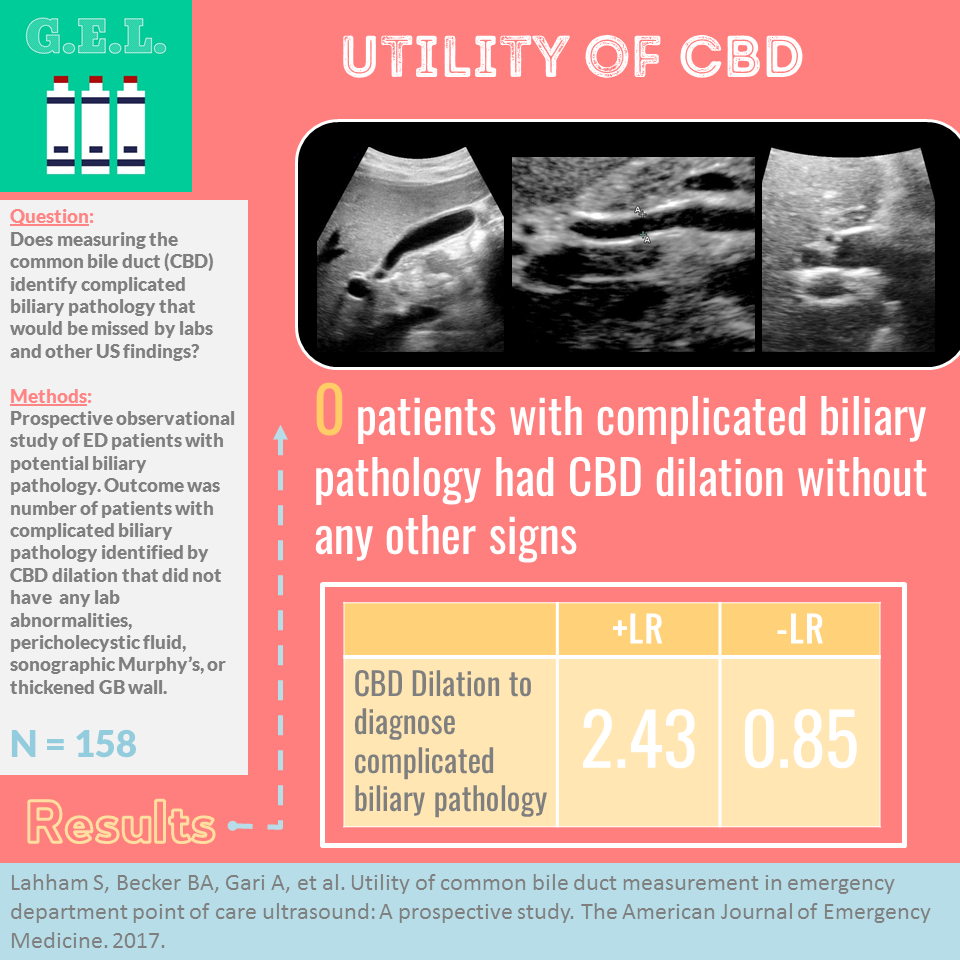 1. Common bile duct dilation did not contribute to diagnosing complicated biliary pathology in this study.

3. Wall thickening was the most common sonographic finding in complicated biliary pathology whereas less than 50% had gallstones.

We know that ultrasound is the initial test o’ choice for suspected biliary pathology. We are looking for problems such as gallstones, cholecystitis, cholangitis, and choledocholithiasis. Point of care ultrasound has been shown to be accurate and to expedite the management of the patients who require work up for these diseases. It’s easy enough to see if there is wall thickening, fluid around the gallbladder, and gallstones - but finding the wiley common bile duct can be tricky. Especially when it is a normal size, it can be quite small and difficult to find. Therefore, this article aimed to see exactly how important it was to find and measure the common bile duct. Would there be significant pathology missed if the work up was otherwise not concerning?

Is there utility to measuring a common bile duct (CBD) diameter to diagnose complicated biliary pathology in patients with normal laboratory values and no gallbladder wall thickening, pericholecystic fluid, or sonographic murphy’s sign on POCUS?

Diagnoses classified as one of three possibilities:

Patients in the ED received standard history and physical. If there was concern for biliary pathology, they were enrolled in study.

They then underwent RUQ POCUS and laboratory testing (at the discretion of treating physician). Blinded to lab results at time of POCUS.

Patients contacted at two weeks for follow up. If not reached, called monthly for 1 year. If still not reached → excluded from study.

Emergency physicians - a total of 26 at various levels of training (resident, fellow, attending)

No study-specific instruction or work shop. All had completed at least 1 hour of didactics and 3 hour of hands on scanning (in basic US training).

Considered abnormal if any of these:

Learn how to scan the gallbladder! - 5 Minute Sono - Gallbladder

44.9% had some other abnormal US finding

Only 2 (1.3%) cases of complicated biliary pathology without laboratory abnormality or POCUS abnormality. Neither had CBD dilation.

Of all of the patients with CBD dilation - 2 (10%) did not have at least one laboratory abnormality, or abnormal POCUS finding besides gallstones.

Dilated CBD found in 9.7% (11/113) of the uncomplicated or non-biliary diagnoses

The POCUS findings were not correlated with any standard or expert overview. So perhaps there could have been inaccuracy in POCUS interpretations - this could make the test accuracy results different (could be better or worse). However, this does reflect actual practice because these physicians will be using their own scans to make decisions generally.

Gold standard was discharge diagnosis. Since not every patient received a definitive study (like MRCP or ERCP for example), it is impossible to say that there was not pathology that was missed. However, since ultrasound is known to be fairly accurate for these diseases, this may not have thrown off the results too much.

Average BMI 28. We know that the larger the patient, often the more difficult it can be to obtain good abdominal images.

No cases of cholangitis or malignancy - unclear if these and other etiologies could present with common bile duct dilation without other sonographic or laboratory abnormality.

Instead of calculating the test characteristics of dilated CBD (which everybody suspected were bad), it would have been nice to calculate the test characteristics of [GB thickening, pericholecystic fluid, sonographic Murphy OR abnormal labs] for diagnosing complicated biliary pathology. They obtained the data to do it but not enough information provided in manuscript to calculate it.

Should we still attempt to find the bile duct? Should we still teach others to find the common bile duct? Probably yes to both. Remember that this is just a single study with less than 40 patients with complicated biliary pathology - not enough to hang your hat on. They were able to find the common bile duct in >95% of the cases in this study, so its not as hard as you might think. Although it is unlikely to help you, there is the small chance that it might some day. Everyone should still know how to find it and how to recognize when it is abnormally dilated.

1. Common bile duct dilation did not contribute to diagnosing complicated biliary pathology in this study.

3. Wall thickening was the most common sonographic finding in complicated biliary pathology whereas less than 50% had gallstones.

By Anonymous on 01/25/18 04:06 PM
great study..........numbers low, but certainly suggests that when one can't find the CBD, and clinical and lab findings don't suggest biliary path, it will be OK to let pt go home and return for further evaluation/workup as needed.

By Mike Prats on 01/26/18 12:02 PM
Thanks for your comment. I agree with you for the most part - the important point is that we are always treating the patient together with the ultrasound findings and not just making decisions based on US alone. If the patient looks bad or you just have a suspicion - you may need to get further imaging or observation. It does seem that not finding the CBD may not play much into the decision making.