POCUS in Hypotension - the SHOC-ED Trial 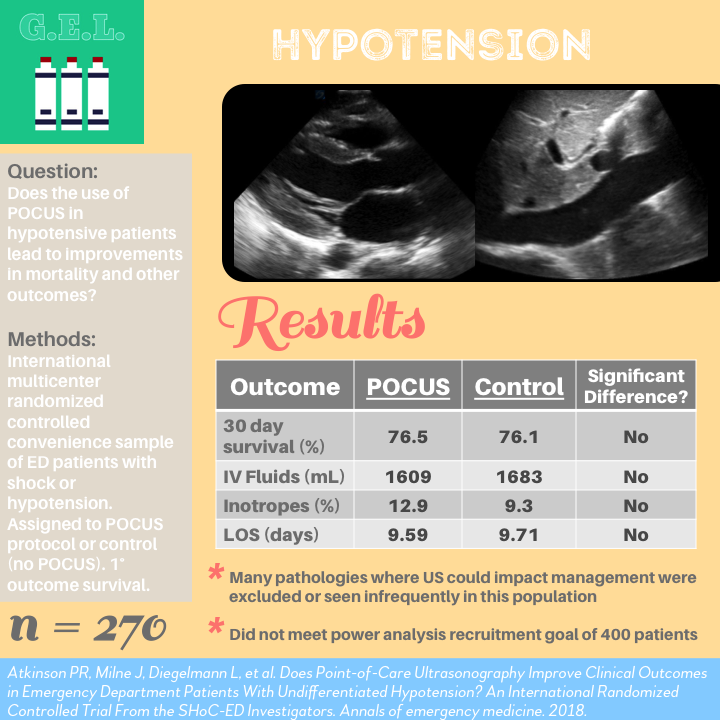 1. This RCT did not enroll enough patients to find a 10% mortality difference between arms.

2. Based on this data, POCUS in hypotensive patients did not result in any significant difference in mortality, length of stay, or changes in management.

3. This is not sufficient evidence to stop using POCUS in this population. In addition, there still remains question whether or not POCUS could affect mortality in a more targeted patient population with intervenable findings.

When it comes to reviewing research in point-of-care ultrasound (POCUS), there are a few critiques you know you will always have in your back pocket. A) This is likely a small convenience sample with highly trained operators and B) there are no patient centered outcomes. Well, finally someone took the bull by the horns, and tackled these problems by conducting a multi-center, randomized controlled trial, looking at the primary outcome of patient survival. Furthermore, they looked at a patient population where everyone says ultrasound should help the most - those with undifferentiated hypotension. Ultrasound has been shown to help determine the cause of shock in these patients, as well help guide management. These authors randomized patients to either get ultrasound in the emergency department or not, and then looked at how they did. So now you can see why this trial was so anticipated - it held the fate of POCUS in its hands. So what happens when the results don’t support POCUS?! Well - I guess you’d better keep reading.

Does the use of ultrasound in hypotensive patients lead to improved mortality or other patient centered outcomes?

Hypotensive or shock patients flagged, consented (consent could be waived for mental status)

Emergency physicians who had been trained and were available performed a standardized protocol (see below for details) reviewed to ensure inclusion and exclusion met.

Randomly assigned to control (no POCUS) or intervention (protocol). Randomization done in blocks, by site

Resident could be performed exams if supervised

Their protocol was based on two hypotensive protocols - ACES and the RUSH exam.

This includes the following views:

*Recruitment stopped after 4 years due to slow recruitment and futility of continuing (as determined by research ethics board).

No different between groups

No significant difference in rates of inotropes (12.9% in POCUS, 9.3% in control)

No significant difference in rates of CT scanning.

No significant difference in hospital admission rates (81.8% in POCUS, 93.7% in control)

No significant difference in overall hospital or ICU length of stay.

Even though it was randomized and controlled, it was a still a convenience sample since patients were only enrolled when there were available ultrasound providers. As usual, this inflicts a bias to the population in this study.

Exclusion criteria. By excluding several cases where ultrasound is known to aid in management (ectopic pregnancy, trauma), this could have removed the patients that benefit most, thereby removing a potential mortality benefit. Furthermore, even though not excluded, cardiac tamponade and AAA (other cases were ultrasound is known to benefit) were rare in this population. Most of their population was sepsis. The main ways ultrasound could be helpful here is A) finding a source and tailoring antibiotics B) helping with decisions in fluids vs pressors. Well for A - most patients likely received broad spectrum antibiotics so US may not have mattered there. For decision with fluids vs pressors, ultrasound would theoretically help but there was no difference in this study. Unlike cardiac tamponade, PE, ectopic pregnancy, a positive FAST exam - there is no real benefit that diagnosing septic shock by ultrasound would convey.

Did not meet predetermined power analysis goal. Would this have changed if they had had another 200 patients? Maybe. The investigators think not.

A good amount of some views could not be obtained - up to 50% of some cardiac views, the majority of right heart function assessments. Perhaps results would have been better if training had been better? On the other hand, this population is likely representative of many POCUS user’s training level. It would have been nice if the ultrasound were over-read by an expert to see if they were interpreted correctly.

Is POCUS performed “within 60 minutes” ideal? Perhaps it needed to occur faster in order to convey more benefit. Just a thought.

Unlike other studies, in this case the physician who did the ultrasound was not blinded to the other aspects of the patient. This is good because it represents how point of care ultrasound should actually be used, as an additional tool in helping your patient.

Other studies have shown that ultrasound decreases the time to diagnosis and can decrease time to interventions. This study did not show a mortality benefit to patients, but they did not present data from which we can understand whether or not there was a provider benefit. I think we would all agree that a patient centered outcome like mortality is more important than saving the physician a little time BUT it would have been useful to see if there was no mortality benefit DESPITE less time to diagnosis or DESPITE less time to intervention. It just leaves the door open that maybe there would be a benefit in this study if they could demonstrate what others have shown before.

If we were to agree that there is no benefit to POCUS, are the down sides of performing an ultrasound acceptable enough to justify using this modality? Even if it will benefit even one person once in a while?

Should we expect that a diagnostic test will have a mortality benefit? Does performing a chest xray on a patient with chest pain improve their mortality? Maybe we are searching for the wrong type of benefit here.

Another recent study of interest: Transthoracic echocardiography and mortality in sepsis: analysis of the MIMIC-III database, Intensive Care Medicine June 2018

This was retrospective study, single center, MICU and SICU patients. Inclusion were adult patients with sepsis. Compared a group who received TEE within the first 24 hours prior to ICU or during ICU to a group who did not have an echo performed. N = 6,361

Also found the TEE group had

There are problems with this data - it was retrospective and used comprehensive echos (not point of care). But it is interesting that there was a mortality benefit in this population of septic patient. How can we make sense of this in light of the SHOC-ED results? Maybe the randomization eliminated a bias that led to the benefit. Or maybe this means you need a ton more patients to show benefit in a group of patients with sepsis.

1. This RCT did not enroll enough patients to find a 10% mortality difference between arms.

2. Based on this data, POCUS in hypotensive patients did not result in any significant difference in mortality, length of stay, or changes in management.

3. This is not sufficient evidence to stop using POCUS in this population. In addition, there still remains question whether or not POCUS could affect mortality in a more targeted patient population with intervenable findings.

Other Great FOAMed on This Article