A POCUS Protocol for Intussusception 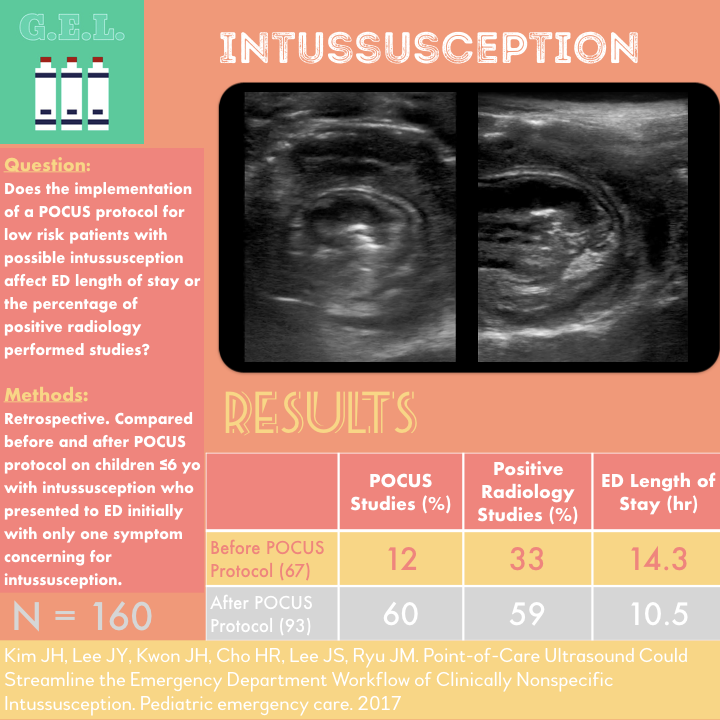 1. This study provides some weak evidence that POCUS can potentially decrease length of stay and radiology referrals in pediatric ED patients with suspected intussusception.

2. This strategy may not be effective unless you discharge after negative POCUS study. This practice is of unclear safety as the sensitivity of POCUS for intussusception is not well established.

Intussusception is the most common cause of intestinal obstruction in toddlers. Less than 30% have the (complete) classic triad of colicky abdominal pain, currant-jelly stool, vomiting/”sausage-like mass”. Ultrasound is the diagnostic modality of choice. Case reports and single site studies support the use of POCUS to evaluate for intussusception (no rigorous studies at this time). There is some concern that there may be unnecessary referrals for radiologist performed ultrasounds - they cite 85.9% negative US in one study. Although negative studies don't mean that it wasn't the right thing to do, perhaps the yield can be improved if there was a screening exam with POCUS. The point of this study is to see if implementing a POCUS protocol helps improve the work flow in the emergency department.

Does the implementation of a POCUS protocol in patients with clinically nonspecific intussusception (CNI) affect:

This is an important point. To backtrack a little, classic presentation of intussusception is the triad of abdominal pain, currant-jelly stool, and vomiting or a ”sausage-like mass”. There is discrepancy which symptom is actually the third part of the triad - vomiting or the mass. I looked at multiple sources, and it seems that most favor vomiting as the third symptom; however, this study used the mass as the third aspect of the triad. With that said, this study included both as one of the symptoms they look at so it all comes out in the wash. So they defined Clinically Non-specific Intussusception (which it seems they made up) as a patient presenting with only one manifestation out of these three symptoms: pain/irritability, mass, bloody stool, AND/OR vomiting. This means that patients with both pain and vomiting, for example, could be included, but if they had pain and bloody stool, they were excluded from the study. They were trying to rule out the disease in a lower prevalence population.

Retrospective cohort study. Before and after design.

All children with CNI confirmed by radiology US and treated by air enema over study period were included. Lots of data collected → all of these data were reasonable, although unclear utility of labs as these labs are not routinely performed for the evaluation of intussusception.

Regarding ultrasound findings, they noted:

Some of these (thickness ≥ 10 mm, ≥2 involved lymph nodes, and trapped fluid) are thought to predict irreducibility.

Recorded frequency of POCUS performance and positive US results.

Pre-intervention group (PRE) = May 2012 through April 2014. One pediatric emegency medicine (PEM) attending and multiple pediatricians. The PEM attending in the group occasionally did POCUS for intussusception.

No detail provided regarding scanning protocol.

Makes sense, this is after the POCUS protocol was instituted.

This is what they expected, more radiologist US are positive because the screening POCUS has taken out those unlikely to have disease.

Door to reduction time (137 min vs 111 min), and observation times (11.66 hours vs 8.86 hours) also improved. Note - on all of these time comparisons the confidence intervals between groups overlapped.

100% specificity - all positive POCUS studies were confirmed on radiologist ultrasound.

No difference between groups with regard to recurrence, admission, or surgery.

Of the 56 children that had POCUS scans, 55 were positive with radiology confirmed US and air enema.

There was 1 false negative study that is mentioned. After having a negative study, she developed further symptoms during observation and underwent subsequent radiology performed study which was positive.

They did not find any follow visits or returns on patients discharged with negative POCUS study.

External validity limited as this was a single center, outside of the US.

Are these changes/improvements really due to POCUS? That's the problem with PRE and POST studies in general. There were significant differences in rates of intussusception between the two groups that could affect outcomes. Another variable is that they went from 1 to 5 attendings! Also,can the improvements seen really due to POCUS when only 60% of patients in POST- group got a POCUS scan?

Most of the improvement in LOS time seemed to come from the decrease in observation time. They do not mention why this was but state that it could have been due to recent studies suggesting a shorter observation time might be safe.

Did they miss any with POCUS? At least 1. Because this was retrospective, they could not follow up on the patients that were discharged after negative POCUS. There were no return visits noted but that only goes so far. They quote a prior study with sensitivity of 85% → their recommendation is for observation after a negative POCUS.

Overlapping confidence intervals in the comparison of time intervals results cast doubt on the significance of the difference.

The fact that the PRE group had more patients with thickened bowel wall brings up the possibility that the PRE group could have been sicker. If this is true but but there were no difference in outcomes, would pre-group have better outcomes if patients were equally ill? Alternately, this could be explained by longer times to time to US in the PRE group.

Despite better times to diagnostics - no difference in mortality, recurrence, or the need for surgery. So it seems it may help the emergency department more than it helps the patient (although certainly length of stay time may be important to patients).

1. This study provides some weak evidence that POCUS can potentially decrease length of stay and radiology referrals in pediatric ED patients with suspected intussusception.

2. This strategy may not be effective unless you discharge after negative POCUS study. This practice is of unclear safety as the sensitivity of POCUS for intussusception is not well established.