A Few Abstracts from WCUME 2017 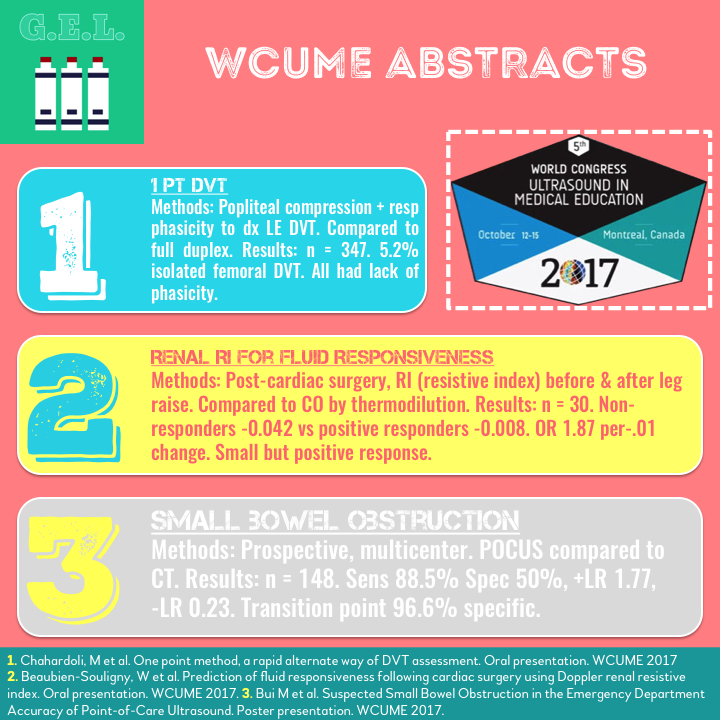 Abstracts from the World Congress on Ultrasound in Medical Education 2017

1. Don't change your practice based on abstracts.

2. One point DVT scan including phasicity - although it seems like this would miss significant proximal DVTs, none were missed in this small study.

3. Change in renal resistive index may correlate with fluid responsiveness, but differences are so small reproducibility seems a challenge.

4. A transition point may be highly specific for small bowel obstruction on POCUS.

What's going on?! Why is this episode so different?

Good question sir or madame. This episode came from the idea that there is a lot of interesting research and ideas that are presented in abstract form at conferences. It may take months or years for this research to make it into the journals and that is a little sad for the people who can't make it to that conference. Recently, Jacob and Mike were in Montreal at the World Congress on Ultrasound in Medical Education and it was phenomenal! A whole conference dedicated to the teaching of ultrasound! We thought that it might be fun to share some of the latest ideas floating around at this gathering of so many smart people in the field. NOW, before you start stomping your foot and wringing your hands in frustration - we know. Abstracts are not the same as published research. For one, they are not as rigorously peer-reviewed and may have lower standards for acceptance. Secondly, they don't give you all of the information, the character limits are too short for that. We don't know the specifics of how everything was done so we are forced to infer or assume the study was done in an appropriate way. So with that being said...

DON'T CHANGE YOUR PRACTICE BASED ON ABSTRACTS

With that in mind, we thought that it might be interesting to share some of the latest ideas cropping up in the research. As always, read responsibly. Comment at the bottom of the post if you do or don't like this idea.

1. One point method, a rapid alternate way of DVT assessment

Some initial studies on point of care ultrasound advocated for the "Two-point" scan. This meant - look in one spot at the common femoral, then one spot in popliteal vein, and then call it quits. The idea is that if you don't see a DVT in these spots, there is unlikely a DVT elsewhere. Well...that turned out to not be exactly true. A study showed you will miss around 6% of DVTs that way. So now, we do two REGION exams. Following the common femoral and popliteal over a more extensive area. Therefore it came as a surprise when this study advocated for a single point exam! The main concept is that respiratory phasicity (the change in the flow of vein with respiration) should be present normally and if it is not - it means something is blocking the vein between your probe and the chest. So this study thought that if you have A) Full compression in popliteal vein AND B) Normal phasicity in the popliteal vein, then you could rule out a lower extremity DVT.

Patients enrolled from emergency department. Inclusion and exclusion criteria alluded to but not made explicit.

Checked single point scan by emergency residents or attending: Popliteal vein evaluated for compressibility and respiratory phasicity. If normal → considered negative for DVT. If either abnormal → performed exam of proximal veins of leg.

Of the people without DVT, 57 (20.9%) had abnormal phasicity. This prompted proximal vein evaluation, which in all cases was negative for DVT.

Since isolated femoral clots are rare and this study only included 4, this is not definitive evidence that this is a good strategy.

Seems risky but maybe phasicity could be sensitive enough that it will pick up proximal occlusions.

Too early to change practice, but maybe test this idea out yourself. Start with popliteal and see if this holds true in your scans.

The search for the perfect non-invasive measurement of fluid responsiveness continues. We want something that will select out a population that would benefit from more intravascular volume. This paper looks at a novel parameter for this purpose. The resistance index (RI) is something that is used commonly in doppler (although not usually in the point of care sector). The equation is this:

Here's a video on obtaining the RI. The idea of this paper is that this index might be used to figure out who would be fluid responsive.

They checked renal RI after surgery before and after a passive leg raise. Took the mean of three measurements. Compared to cardiac output as measured with thermodilution, performed at the time of doppler assessment. 10% increase in cardiac output considered responsive.

There was association between change in RI and improvement in cardiac output following PLR: OR 1.87 per -0.01 change

We don't know the full methods.

Results may have been significant, but the differences are so small that it seems it could easily fall within range of inter-rater reliability.

Cool idea, not ready for prime time. We need a bigger study, broader population, and we need to know that the average POCUS user could accurately distinguish between these minute changes in RI.

Ultrasound is actually pretty good at diagnosing small bowel obstruction (SBO). See this study for a review on diagnostics in SBO. There are only a few studies looking at this so far, so most people (including consultants) are hesitant to hang your hat on it. This article wanted to do a nice multi-center study in the emergency department to figure out the test characteristics.

Patients in ED with suspected SBO

Compared to CT and discharge diagnosis

We don't know the full methods

Results inconsistent with prior literature, where ultrasound is usually more sensitive and specific.

It could be that ultrasound is not as good as we thought previously, or it could be that these authors are doing something different that makes the exam less accurate. Unlikely to change practice at this point.

Transition point is interesting finding not previously described. This may be a more specific finding signifying SBO.

1. Don't change your practice based on abstracts.

2. One point DVT scan including phasicity - although it seems like this would miss significant proximal DVTs, none were missed in this small study.

3. Change in renal resistive index may correlate with fluid responsiveness, but differences are so small reproducibility seems a challenge.

4. A transition point may be highly specific for small bowel obstruction on POCUS.