The Impact of POCUS on Resus Effort & Outcomes in Arrest 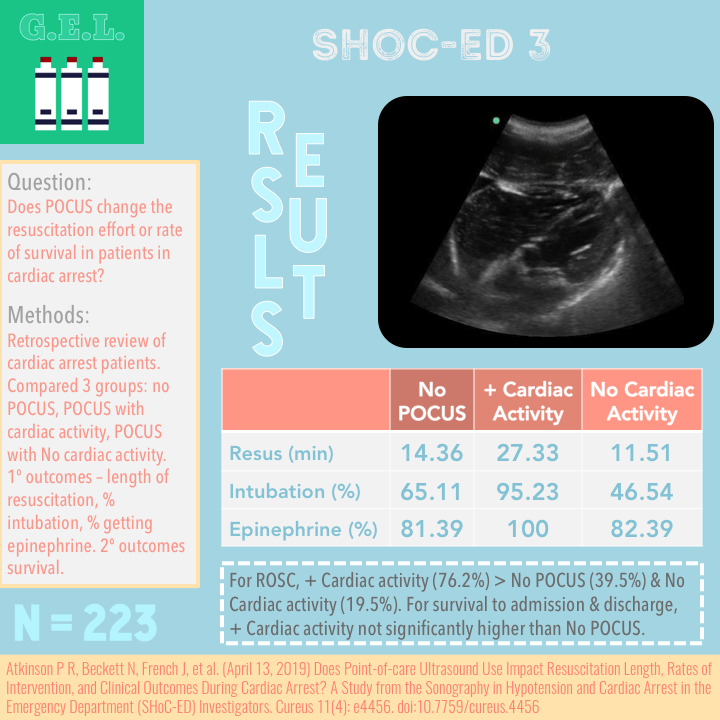 Does Point-of-care Ultrasound Use Impact Resuscitation Length, Rates of Intervention, and Clinical Outcomes During Cardiac Arrest? A Study from the Sonography in Hypotension and Cardiac Arrest in the Emergency Department (SHoC-ED) Investigators

1. Cardiac activity on POCUS is associated with longer resuscitation times and more interventions.

2. Cardiac activity on POCUS is associated with higher rate of ROSC.

3. Unable to establish causality between POCUS and outcomes based on this data.

You may remember the SHoC-ED group from their landmark 2018 study of POCUS in hypotension (see our review). This study called into question the mortality benefit of performing ultrasound in a critically ill population. These investigators once again take a look at a group of fairly sick patients (i.e. dead), this time wanting to see if doing a bedside point of care echo led to longer duration of resuscitation. This work is focusing on the prognostic ability of echo in cardiac arrest. The authors compared patients who received no ultrasound to those who did have an ultrasound. The ultrasound group they split into those with visible cardiac activity and those without it. They looked at measures of "resuscitation effort" and as secondary outcomes looked for differences in patient survival.

Check out The Evidence Atlas - Echo for a review of prior evidence on this topic.

Is POCUS or the presence of cardiac activity on POCUS associated with increased resuscitation effort?

Is POCUS or the presence of cardiac activity associated with improved survival in patients in cardiac arrest?

Patients were placed into groups based on whether or not they received POCUS during Advanced Cardiac Life Support (ACLS).

All patients had ACLS protocol as routine care

Secondary outcomes were rates of return-of-spontaneous-circulation (ROSC) and survival to hospital admission and discharge.

Views: whatever you can get. Subxiphoid, parasternal long axis, or apical four chamber

Cardiac Activity defined as “sustained coordinated contractility of the left ventricle, with visible valve movement”. Note this is different than what is used in the landmark REASON trial. In the latter it was defined as “any visible movement of the myocardium excluding movement of blood within the cardiac chambers or isolated valve movement.” There is still not good consensus on how to define this. It is unclear how they determined presence or absence of cardiac activity - documentation? actual review of the images?

Learn how to do Cardiac Ultrasound from 5 Minute Sono!

Check out what cardiac pathology looks like at the POCUS Atlas!

Chicken and egg scenario. Were resuscitations longer because of positive POCUS findings or were POCUS findings positive because the patients were more likely to survive? Not much control for other factors that could have prolonged resuscitation. Theoretically, POCUS could lead to prolonged resuscitation, and prolonged resuscitation could lead to better outcomes. Obviously you can’t prove causality from a retrospective study, but it is hard to make any convincing argument for it here due to the number of confounders. In my mind, it is more likely that POCUS is likely prognostic, merely identifying a population more likely to survive. Authors say that since positive cardiac activity had increased ROSC compared to no POCUS, perhaps it could be associated with better clinical outcomes. In my mind, the the no POCUS group is just an unknown combination of patients that had cardiac activity and no cardiac activity, which is why it is often worse than the positive findings and better than the negative findings. While it is possible that POCUS lead to more medications or procedures that improved mortality, I don’t think this is enough evidence to prove it.

Furthermore, all of the primary outcomes are likely highly related. The longer resuscitations went on, the more likely to be intubated and to receive more epinephrine. Authors surmise that the resuscitations went on longer when there was positive cardiac activity because the providers were encouraged by the findings; however, good evidence that this finding led to better outcomes was not published until 2016 (again the REASON trial), which is after the period from which these data are drawn.

Bias factor. If patients were not receiving ultrasound, makes me wonder if they were receiving the best care. Obviously, since the decision to end resuscitation and perform procedures is entirely subjective, if the person calling the shots was not up to snuff, it could have changed all of these outcomes as well.

Compared to the REASON results, the survival in this study among patients who received POCUS was much higher. For ROSC, REASON was 51% and 14.3% for positive and negative cardiac activity compared to 76.2% and 19.5% in the current study. For survival to admission (REASONs primary outcome), survival of positive cardiac activity was 28.9% compared to 33.3% here. Similarly this study also had a higher survival to hospital discharge for these patients (9.5% compared to 3.8%); however, REASON had a larger group (n = 793) and in the current study the survivors numbered only 1 or 2 per group.

Authors end their discussion by saying that this work provides basis for moving forward with randomized controlled trial of PoCUS in cardiac arrest. I would say that it's a little late for that kind of talk. Most people doing POCUS would be very reluctant to perform a cardiac arrest without it; it would probably be seen as unethical. Even in this study with data from over 5 years ago, 80% of their patients got POCUS! That would be a hard sell to an IRB.

What to do with this information? The editors capsule for this paper states that “the use of POCUS... may help to identify patients who may benefit from an increased resuscitative effort” (whenever there is 2 “mays” in a statement, I start to get skeptical). I am not sure that this is an accurate takeaway from this data. I think that AT BEST, this study shows that patients with positive cardiac activity had longer resuscitations and patients with positive cardiac activity had better ROSC. Even if we ignore all of the confounders that could make those statements untrue, there is still no reason to think that the longer resuscitation lead to the better ROSC. Furthermore, since there is no improved survival to discharge between the positive cardiac activity and the No POCUS group, I don’t think that we can really say there is an improvement in long-term survival. (Not to even mention there was no assessment of functional status of survivors).

Here’s a question: what if the advantage of POCUS in cardiac arrest is dependent on the finding? Here’s what I mean. This study showed that people who got POCUS and had cardiac activity did well but people who got POCUS and had no cardiac activity did worse than those who didn’t get POCUS. As discussed above, this is most likely due to the non-POCUS group just being a combination of the other groups. But even to say that it confers no benefit to the group with negative cardiac activity, means we have to take into account the risks. Since there is now substantial evidence stating that doing POCUS can lead to delays in chest compressions, that could potentially make the exam more harm than good. So do you just play the odds and not scan the patient or perform the exam hoping that you find one of the few patients that might benefit from it at the cost of potentially harming your patient??

1. Cardiac activity on POCUS is associated with longer resuscitation times and more interventions.

2. Cardiac activity on POCUS is associated with higher rate of ROSC.

3. Unable to establish causality between POCUS and outcomes based on this data. 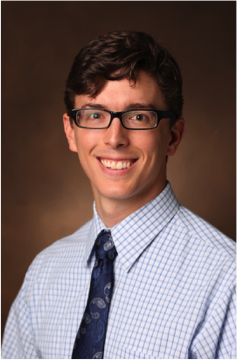 Living and working in Nashville, TN as Ultrasound Fellowship Director at Vanderbilt University Medical Center and another hospital that starts with a V.

I agree it is important to highlight the differences from the important REASON trial. There really isn’t a good consensus for cardiac “standstill” in the literature. This is a major weakness of the article. No clear definition and likely left to gestalt, and of course anyone who had “standstill” often died. Because they never got resuscitated. Because they were standstill…etc. I think there are major limitations to this study given the current state of the literature after REASON. This is more of a step backwards than forwards IMHO. Important work, but there needs to be better prospective research in this arena.