STONE PLUS - a Tool for Renal Colic 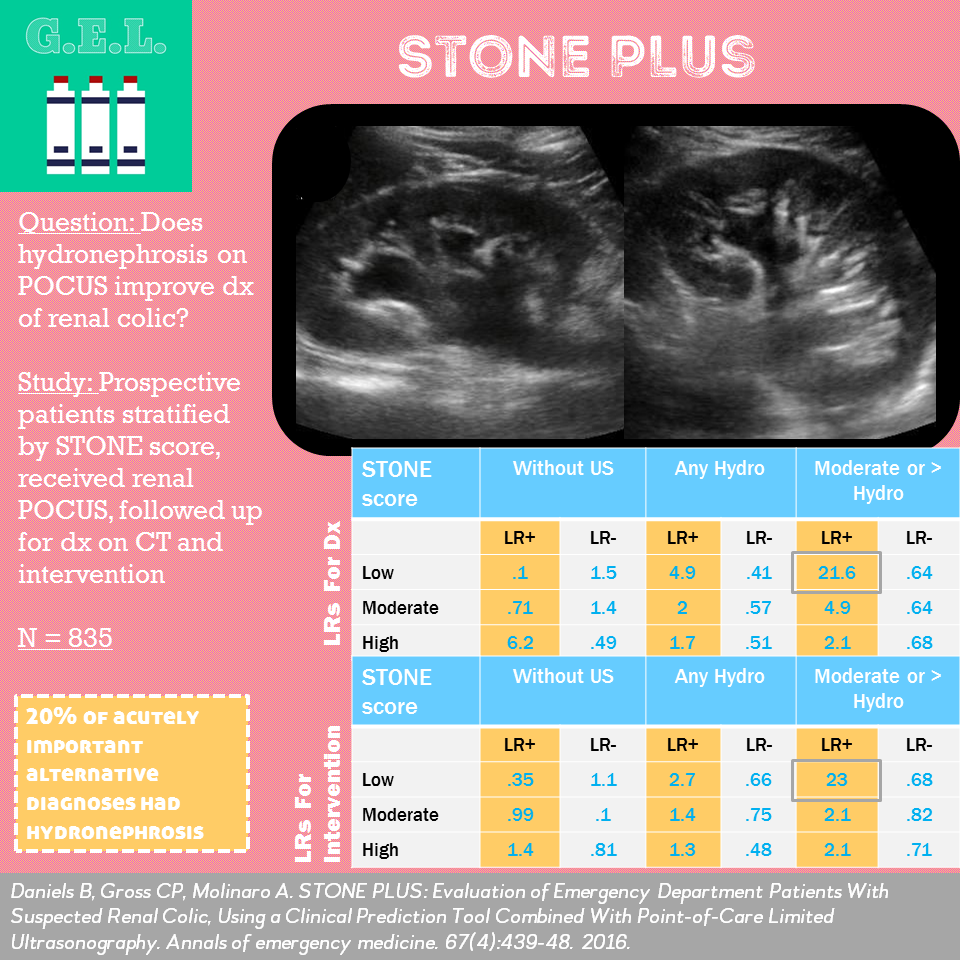 2. Hydronephrosis improved prediction of need for intervention in low STONE score group, but only weak improvement in moderate or high STONE groups.

3. You can still miss important alternative diagnoses even if the patient has hydronephrosis.

Pain from kidney stones is a common reason for presenting to the emergency department. Sometimes the diagnosis is easy, but there are other pathologies that can masquerade as renal colic. CT is performed in 70% of patient with a diagnosis of ureterolithiasis. This can pick up alternate diagnoses but at the cost of time and radiation. Ideally, there would be a clinical prediction rule that could diagnose those likely to have an uncomplicated symptomatic stone and unlikely to have alternate findings. The STONE score (previously described here) is an acronym that looks at clinical features of the patient and presentation to provide a risk that this presentation is caused by a stone. STONE score = sex (points for being male), timing (points for acute), origin (points for nonblack race), nausea (points if present), erythrocytes (points for hematuria). So how does ultrasound fit in? This study wants to know if adding ultrasound to this score makes it more accurate at predicting who has a kidney stone and also if it can predict who will require an intervention.

Does the finding of hydronephrosis (sometimes abbreviated as hydro from here on out) on point of care ultrasound (POCUS) improve STONE score for identifying patients with ureteral stones as the cause for current symptoms?

Can hydronephrosis on ultrasound identify people who need urologic intervention for their stones?

Prospectively enrolled, not blinded, not randomized, no control

Alternate findings = if determined to be cause of pain, required intervention (abx, admission, operation)

Interpreted at bedside, degree of hydronephrosis conveyed to research assistant

Patients followed up at 90 days for any urological intervention

Determined if no, mild, moderate, or severe hydro

Ureteral jets noted but not required part of scan

Learn how to ultrasound for hydronephrosis - 5minsono

Renal PLUS for diagnosis of symptomatic ureterolithiasis

If moderate or greater hydronephrosis

If moderate or low STONE score - adding the finding of hydronephrosis increased chance of stone as diagnosis.

If high STONE score - adding hydro did not change accuracy much (in fact, for the most part, it worsened)

People with hydro were more likely to require intervention, OR 3.5 if moderate or greater hydro, OR 2.7 if any hydro.

Note LRs are not that big. Only one above 10 is low stone score with moderate or greater hydro (for both making the diagnosis and requiring intervention).

Moderate or greater hydro was 86% specific for urologic intervention.

Patients who required alternate intervention even when they had hydro, 2 who had high score (pyelo, appe). 3/5 appendicitis they saw had hydro. 25% of pyelo/UTI had hydro.

Overall, 11 of the 54 (20.4%) of the acutely important alternate findings had hydronephrosis.

Also, the authors created an algorithm:

They estimate that you could save 34% of the CTs done in this study by this protocol with only 1% would have missed diagnosis.

Patients who did not receive CT were not included - limited sample to patients in whom practitioners felt CT was necessary (perhaps because of suspected alternate diagnoses).

Results show only a small percentage of population helped by ultrasound - mostly when you found hydro in those whom you did not suspect to have a stone based on their STONE score. Does this mean that people we don't think have a kidney stone need a renal POCUS, but people that we are convinced have renal stones do not need one??

2. Hydronephrosis improved prediction of need for intervention in low STONE score group, but only weak improvement in moderate or high STONE groups.

3. You can still miss important alternative diagnoses even if the patient has hydronephrosis.