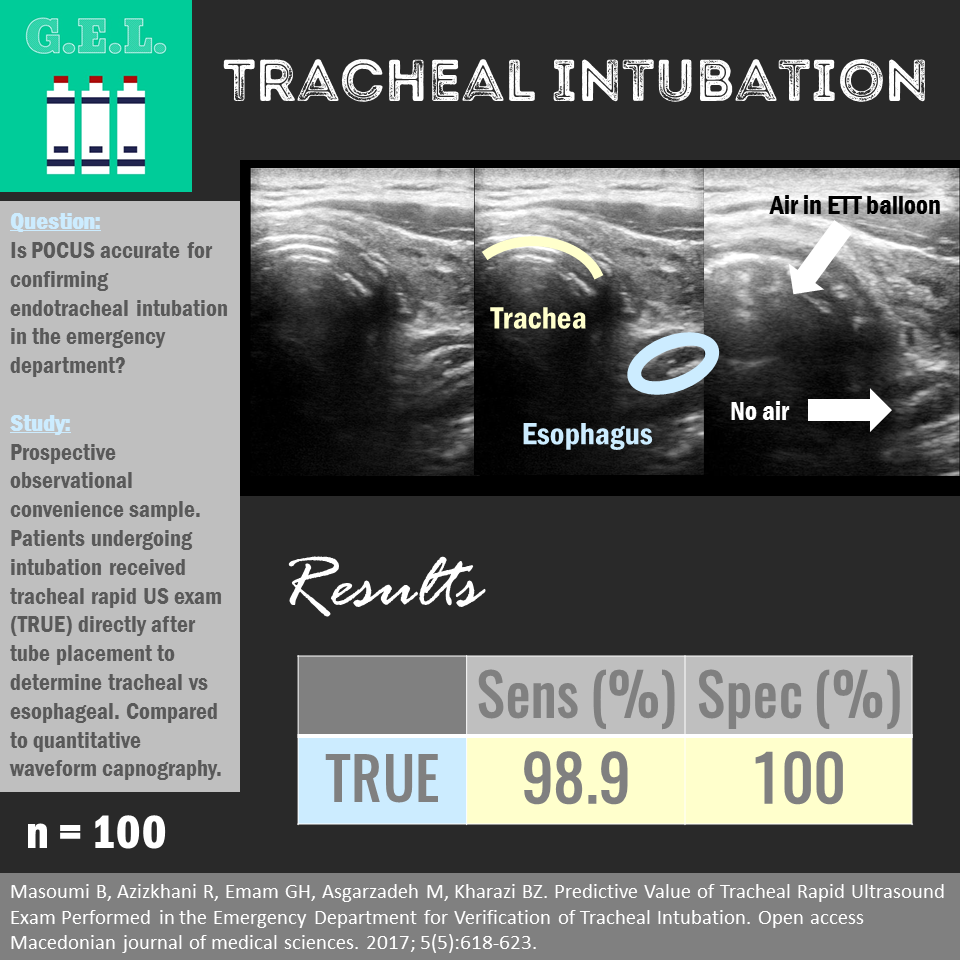 2. More research is needed to determine if this technique offers advantages compared to existing methods.

Placing an endotracheal tube (ETT) can sometimes be a challenge. Because there is always the risk of the tube going into the esophagus, it is routine to confirm that it is in the right place after the procedure. This can be done with simple auscultation, end-tidal carbon dioxide monitoring, a chest xray, and many other ways. Often times multiple methods are used. Ultrasound has also been shown to be useful for this purpose, and there are few ways that you can do it. You can use ultrasound to confirm that the ETT is in the trachea by visualizing the balloon pass or measuring tracheal dilation from the balloon. You could also look for symmetric bilateral lung sliding to confirm that you are not in the right or left main bronchus. Some of the past studies have been done in the controlled environment of the operating room. This paper takes a look to determine the accuracy of one method of confirming the ETT with ultrasound in the emergency department.

How accurate is tracheal ultrasound in determining whether the endotracheal tube is placed in the trachea or the esophagus during intubation in the emergency department?

Single Urban tertiary referral center. Most of the authors work in Iran so study may have taken place there.

Article states: “We randomly sampled among patients who met the inclusion and exclusion criteria for the purpose of our study. Although we sampled from the pool of existing patients for convenience, randomization was not influenced by the work schedule of physicians or time of day.”

All intubations were performed by a single physician (one of the authors).

Intubation was first confirmed by auscultation and quantitative capnography by a second investigator.

Then a third investigator did the TRUE (Tracheal Rapid Ultrasound Exam). He was not only blinded (curtain in place so he could not see intubator) but deafened as well (he wore ear plugs). He performed his exam without knowing anything regarding the resuscitation or hearing interactions of the team. Afterwards he reported “in tracheal” or “in esophagus”.

The placement determined by the TRUE was compared to the gold standard of the quantitative waveform capnography.

Initially it reportedly emergency physicians and residents, but it seems that a single resident did all of the ultrasounds.

Curvilinear Probe (but can also use linear probe)

They did not explain how to do this exam in the paper!

Looking at another article on the TRUE scan that they sited in references, MAYBE this is how they did it:

Step 2: After or during intubation, it is considered tracheal intubation if only one air-mucosal interface seen

Step 3: Considered esophageal if two air-mucosal interfaces seen (meaning one is the tracheal and one is the ETT balloon in the esophagus)

Learn how to confirm your intubations with US! - 5 Minute Sono - ET Tube Confirmation

By gold standard of capnography:

Only one TRUE exam disagreed with the standard. In this case, the TRUE exam was interpreted as esophageal but it was tracheal. All positive TRUE exams (meaning confirming it in the tracheal) were confirmed with capnography standard.

Some methods are not articulated. They don’t say exactly how they did the exam - was it tracheal width measurements? Was it visualizing the balloon (can be difficult after the intubation)? What country was this study performed in? This could limit the external validity.

Patients with neck pathology were excluded. This likely inadvertently selected for easier intubations which could bias results.

It was possibly a single provider who performed all of the ultrasound exams. Since he received three weeks of training - these results may not be reproducible by everyone.

They said a goal of the study was to replace end tidal CO2 with ultrasound - why? What is the downside of end tidal? Expense? This is my biggest concern with the study. Although ultrasound of the tracheal is pretty fun to do, in my mind, it is not solving a major diagnostic dilemma. It is only marginally faster than end-tidal CO2 so that there is not likely to be a major time saving benefit. I suppose in the critically ill patient, you would be able to determine the placement prior to insufflation, potentially avoiding unnecessary air into the esophagus and delays which could lead to hypoxia. On the other hand, there are some downsides to it in that it takes an extra person to perform it and it takes up more space in a crowded room. We need more evidence that this technique is going to benefit the patient or the provider before replacing any existing methods.

This might be a useful technique in the pre-hospital setting, austere environments, or other scenarios where you do not have equipment usually available in the emergency department.

This exam may not always be feasible given the resources of time and personnel in a practice environment. There was no mention of the time it took or any difficulties in performing the exam.

It likely would be better to confirm the intubation in real time with ultrasound (as opposed to after intubation as in this study). As it is happening, you can visualize esophagus and tracheal and see which one changes as the balloon is passed through.

2. More research is needed to determine if this technique offers advantages compared to existing methods.