The Effect of POCUS on Abscess Treatment Failure 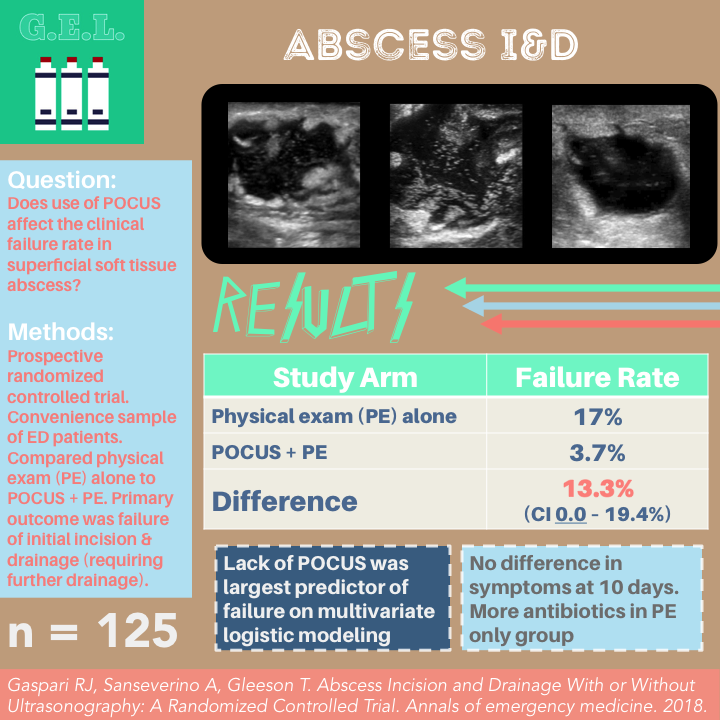 Abscess Incision and Drainage With or Without Ultrasonography: A Randomized Controlled Trial

1. Not using ultrasound for superficial skin abscess is likely associated with increased failure of initial incision and drainage.

2. Unclear how this benefit would be mediated; may be related to POCUS being used to guide incision or check adequacy of drainage.

Ultrasound is good at finding skin and soft tissue infection. This is particularly important when deciding whether or not to cut into a patient to try and drain some fluid from an abscess. Previous studies have shown that point-of-care ultrasound (POCUS) is most likely to be diagnostically helpful when the diagnosis of abscess is not clinically apparent (see our review of a 2016 metaanalysis). Although still disputable due to some contradictory evidence, POCUS likely does help diagnose abscess. However, the accuracy of diagnosis compared to physical exam is not a patient centered outcome. Patients don’t care about accuracy of the diagnosis unless it means something bad happens to them. Well - that’s where this study comes in, the latest and greatest abscess POCUS study. These authors randomize patients to get POCUS or not and then look at rates of treatment failure. That’s right. They want to see if using POCUS during treatment of an abscess increases the chance that the incision and drainage will work!

Does POCUS use during the treatment of a superficial soft tissue abscess lead to lower clinical failure rates compared to physical exam alone?

Randomized in 20 patient blocks to one of two arms:

A. POCUS + physical exam and incision and drainage

B. Physical exam and incision and drainage without POCUS

Here's how it went down:

Abscess was diagnosed (either by exam or by POCUS)

Randomized to intervention or control

If diagnosed with POCUS but randomized to control, the clinician was blinded to the POCUS done (except to know abscess was present)

Incision and drainage was performed

Patients asked to return in 2-3 days for repeat exam, clinician determined if need for further treatment

Primary outcome: failure of therapy, defined as requiring a repeat incision and drainage that produced purulence. Determined on telephone follow up at 10 days.

Power calculation: need sample of 53 patients for 80% power to detect 13% difference between groups

Analyzed per protocol and also intention to treat.

Majority of patients enrolled by senior residents and faculty

Interpreted as positive or negative for abscess cavity.

IMPORTANT: Ultrasound as used for I&D was not standardized. One of these three options probably occurred:

68 patients returned for follow up 2-3 days after initial visit.

All patients had telephone follow up at 10 days (because they were excluded and not analyzed otherwise).

Authors: “The study included a small sample size with a lower CI of 0.0, so this does not exclude the possibility of a less than clinically significant outcome.”

Me: You cannot definitively say there was a true difference.

When analyzed with intention to treat - no significant change.

If they assumed all excluded patients with POCUS failed AND assumed that none failed after physical exam alone, then there was no difference (13.3% vs 15%). This just means that the excluded patient's could have had a significant effect on the results depending on which way they went.

No difference in the symptoms between groups at follow up.

There were more antibiotics given in the physical exam arm group despite similar rates of antibiotics initially prescribed in the emergency department. They don't discuss this much, but this is based on my interpretation of Table 1 from the study.

Convenience sample, selection bias. It is concerning that only a little over a quarter (27.7%) of the patients that could have been enrolled were enrolled. This means that we really have to think about what other confounders and biases there could be in this select population that made it into the study.

Definition of failure is questionable. What if what a patient that appeared to need drainage at 2 days actually improved without intervention by 10 days? Since not everyone was seen at 2 days, this wouldn’t really be fair. Some would get incised and count as failure, some might recover with antibiotics by day 10 and not count as failure. Also, since the standard used was the presence of pus with drainage (specifically mentions that only bloody I&Ds did not count as treatment failure) yet the standard was determined at the 10 day follow up phone call - they must have been reliant upon the patient to determine treatment failure or not. This really seems questionable with regard to accuracy.

No blinding after initial visit. Likely could have affected the follow up visit - if they knew that ultrasound had been used the first time, may have thought it more likely to have a successful drainage. Performing a successful additional I&D was the primary outcome so could really affect the difference in failure between groups.

Only 11 patients failed overall. Authors note this resulted in wide confidence intervals. Confidence interval for primary outcome included 0.0 sooooo, technically that means it may not be a significant result.

Unclear which ultrasound technique is best for success. Whenever a finding doesn’t make complete sense, it probably warrants a little more investigation. See discussion below.

These patients were diagnosed based on EITHER physical exam or POCUS. Although the treating physician was blinded to the initial POCUS in this case, who knows what effect that could have had on the outcome.

Authors suggest that ultrasound helps by better planning of the incision, performance of the procedure, or assessment of the drainage. I guess this is believable, but you have to wonder if ultrasound alone is responsible for the difference since it is not intuitive how it alone could decrease the recurrence. The first conceivable theory is that ultrasound guidance allows for the perfect incision, over the area with the greatest collection of pus, which then leads to decreased recurrence. An alternate theory is that ultrasound was used to assess the efficacy of the drainage by assessing for a remaining pocket after drainage. Then they could incise more or compress more to assist with more adequate drainage. We don’t know how many people actually did that. The exact cause will have to remain a mystery until we have more data. The authors did do a nice job with the additional multivariate analysis to look for other confounders.

Authors go out on a limb and say that perhaps ultrasound was also responsible for some of the benefits seen in the recent trials (like this one and this one) adding antibiotics to the I&D of abscess. I guess it's possible, but it seems like a stretch to me.

1. Not using ultrasound for superficial skin abscess is likely associated with increased failure of initial incision and drainage.

2. Unclear how this benefit would be mediated; may be related to POCUS being used to guide incision or check adequacy of drainage.