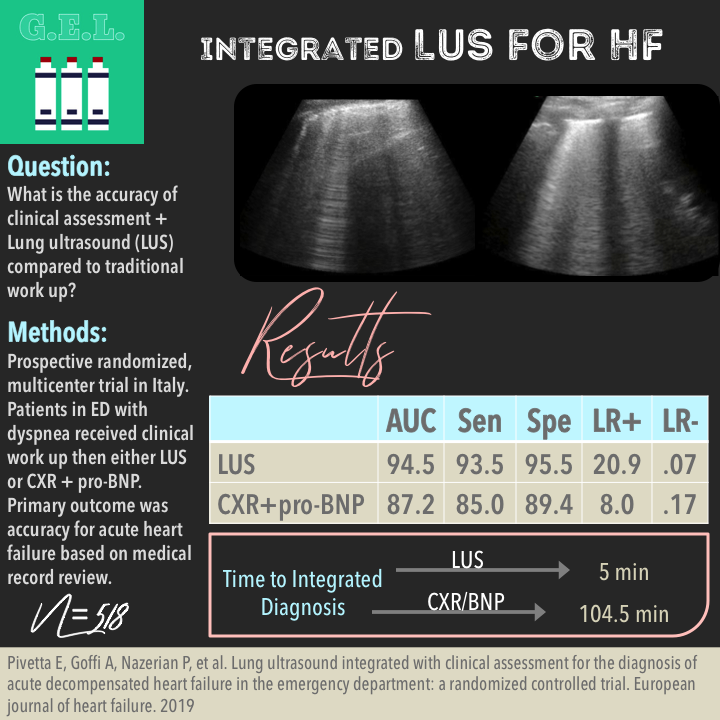 Lung ultrasound integrated with clinical assessment for the diagnosis of acute decompensated heart failure in the emergency department: a randomized controlled trial

2. Lung ultrasound has a significantly shorter time to diagnosis compared to chest xray and natriuretic peptides.

We know that ultrasound can diagnose acute decompensated heart failure. We can look at the heart and see that its not working to well, and we can look at the lungs and find that they are filled with fluid. Other studies have shown that this can be done quickly and accurately. This can be immensely valuable in determining the cause of undifferentiated dyspnea, especially in the critically ill. We have covered a few articles on heart failure (E/e’ and Modified LuCUS). We have also discussed using POCUS in undifferentiated dyspnea. The next question, asked by this illustrious group of researchers, is “how does using lung ultrasound compare to the traditional diagnostic approach?”. It is nice to find out that ultrasound is accurate, but it is better to find out if it is more accurate than what is traditionally used...especially using a randomized, multi-center trial.

What is the accuracy of combined Lung Ultrasound (LUS) and clinical assessment for diagnosing acute decompensated heart failure (ADHF) in patients presented to the emergency department with acute dyspnea, compared to a traditional work up?

What are the times to diagnosis in both arms?

At this point, treating physician had to choose if they thought this was ADHF or non-ADHF (or if both present, which was more relevant to presentation). This was marked as the "clinical diagnosis".

Block randomized to Lung US or CXR + NT-proBNP arm

Using the results available from the allotted diagnostic arm, the treating physician then recorded suspected etiology of ADHF or non-ADHF (again). This was the "integrated diagnosis".

Management based on any and all information the treating physician wanted after their assessments were recorded (diagnostic arm did not matter at this point).

Standard for accuracy was based on review of complete medical record by two physician experts. Used European Society of Cardiology guidelines (the presence of typical signs and symptoms resulting from abnormality of cardiac structure or function). If disagreement, a third physician (cardiologist), was tie breaker.

Calculated the accuracy but also the net reclassification index (how many times the diagnosis changes based on new information from the diagnosis arms) and net benefit (benefit minus the harm of a diagnostic test for a given threshold probability of ADHF).

Interstitial syndrome defined as 3 or more B-lines per intercostal space in two or more zones, bilaterally.

ROC for CXR/NT-proBNP was not significantly better than initial clinical evaluation.

Pleural effusions alone (both unilateral or bilateral) was not very accurate for the diagnosis of ADHF.

Median number of positive lung zones was 6 in ADHF, 1 in non-ADHF

Time to Integrated Diagnosis (from time of clinical diagnosis):

Non-US populations which limits some of the external validity. Fairly high prevalence of disease in this population (43%). Although multi-center, 79% of patients came from one hospital. Also they did not enroll patients in ADHF without dyspnea, so this accuracy may not apply to all ADHF.

Secretly, a convenience population of sorts. These patients were not necessary consecutive prospective patients. They could be excluded if there was no LUS expert present. This could bias the population studied depending on if these providers did not work around the clock and week. Authors estimate they could have lost 20-30% of patients with acute dyspnea.

LUS arm had higher accuracy even prior to the integrated evaluation but this was not statistically significant. However, based on history and physical and initial tests, LUS group had a +LR of 9.46, compared to CXR/BNP +LR 7.2. A little strange. This could have inflated the accuracy of the integrated evaluation, because some of the accuracy could just be due to that population having a more obvious diagnosis. Unclear why this would be the case.

Remember that this time comparison is not always a fair fight. (See this same thing in this Undifferentiated Dyspnea study we discussed previously). When talking about time - there are two aspects to consider. First, the amount of time that passes during which the patient can suffer if not diagnosed/treated appropriately. Secondly, the amount of time the provider is unable to perform other duties. Certainly, ultrasound decreases the former; the information it provides can be simultaneous with the initial evaluation. However, it does take slightly more time for the provider than not doing an ultrasound (though in this study only 5 minutes). Similarly, it is not as though the provider was sitting in lounge chair twiddling her thumbs while awaiting the chest xray and serum BNP - she was probably taking care of other people. Depending on how critically ill the patient is and how critical other tasks may be, these two types of time may have different values.

The patients that did not have CHF in this study mostly had COPD (32.7%), pneumonia (32.4%), URI (13.6%), and then other causes like atelectasis, cancer, interstitial lung disease, asthma, pulmonary embolism. Ultrasound is not that good at finding COPD, URI, asthma (because you just have to exclude all other lung findings). This study was focused on heart failure, but in real life - you still have to figure out what is going on with everyone else who was thrown into the “non-heart failure” group.

Interestingly, in subgroup analysis of patients with ADHF AND COPD (see supplemental figures online) - there was no significant difference in ROC between the clinical and the integrated diagnosis in both LUS and CXR/BNP arms. Also no difference between the two diagnostic arms. Thought not significant, it is comical that the CXR/proBNP arm actually worsened after integrating in the new information (87% → 76.1%). The LUS improved clinical evaluation from 82% to 88.4% on integrated. This looks to me as though if it was powered to show a difference in this population, it still might have. This is an important population as this is a very common dilemma - to treat for CHF or COPD.

Also from supplemental figures - no benefit in subgroup analysis of patients with reduced EF (both between clinical and either arm, or one arm over the other). However, LUS still has significantly greater accuracy in patients with preserved EF.

Why choose? Can’t you just do LUS, BNP, and chest xray and then integrate all of that information? The answer is yes. The authors actually propose an algorithm (again in the great supplemental figures), that advocates for both bedside LUS in conjunction with chest xray and natriuretic peptides. The important point to take from this data is that you should not be doing cxr and proBNP without LUS (because LUS is more accurate); however, it may still be reasonable to obtain those other tests. The concern would be if the BNP or CXR somehow leads you farther away from the correct diagnosis - which is certainly possible and in fact suggested by the data showing a worse accuracy after those tests in the COPD subgroup. However, at this point, I don’t think that this article alone provides enough evidence to advocate for a No-CXR, No-BNP approach. Other studies have looked at US vs chest xray for dyspnea and found comparable accuracy.(need citation) and there is certainly a body of evidence showing that BNP has limited utility in the initial diagnosis of these patients (see great EMNerd post).

What about cardiac and IVC? Should those be added routinely in this population? These authors advocate for performing a cardiac ultrasound if diagnosis is unclear after initial LUS. Our concerns are that it would take more time and limit who could perform the exam. Furthermore, because many people will have diagnosed or undiagnosed cardiac dysfunction chronically, lung findings are more relevant to their acute presentation. If you do perform cardiac ultrasound on all of these patients, should we check diastology on everyone? Where do you draw the line for efficiency vs accuracy?

2. Lung ultrasound has a significantly shorter time to diagnosis compared to chest xray and natriuretic peptides.

More Great FOAMed on this Article 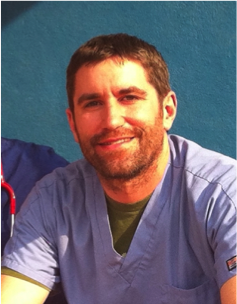 Current Ultrasound Director at Kaiser Permanente San Diego, Past Chair of the ACEP Emergency Ultrasound Section and Past President of the Society of Academic Emergency Medicine

Overall, this is a great study using high level methodology to further demonstrate what we sonophiles experience on a daily basis - lung ultrasound is immensely valuable in the workup of undifferentiated dyspnea. The cool thing about this study is it really shows that ultrasound is not just another test in patients with heart failure, but above and beyond other traditional tests such as BNP and CXR. I did not find major criticisms with this study. If I were to nitpick I would point out that despite the authors claim in the introduction that there are no other randomized controlled trials evaluating ultrasound in dyspnea I would have to argue that the article by Laursen et al in Lancet in 2014 should be mentioned. The studies are a little different in that the current study evaluated lung ultrasound alone whereas the Laursen study utilized cardiac, lung and DVT ultrasound in undifferentiated dyspnea. The cool thing here is they both come to the same conclusion: Faster diagnosis with ultrasound. Now in fairness to the current authors they do mention the Laursen article in the discussion, but in case not everybody got through that far in the paper I wanted to point it out here.

Some may argue that the current paper uses an imperfect gold standard. The final diagnosis was determined by two reviewers who were blinded to initial group and to LUS findings. Ties were decided by a third reviewer. The criticism is that while blinded to LUS findings, it might be impossible to be completely blinded. Reference to the LUS findings would be integrated into the care of the patient from the ED onwards leading to diagnosis momentum and a “self-fulfilling prophecy”. An alternative would be to use the final chart diagnosis as this would actually parallel real world, but there are issues there too as final chart diagnosis is not often correct.This is addressed in the limitations to some degree. But in fairness to the authors, there is no perfect gold standard for CHF and they used an identical methodology to the original BNP validation studies and many other studies evaluating testing in CHF, so I think it’s fair.

While the paper did not set out to look at the big fish outcomes of length of stay and mortality, I couldn’t help but notice that 17 patients in LUS died (6.5%) vs 24 in the CXR/BNP group (9.2%). Could it be that faster diagnosis with LUS leads to a 3% absolute mortality difference??!!! I corresponded with Dr. Pivetta and he is in the midst of crunching away at some of these additional outcomes, so stay tuned.

The authors do a good job of identifying limitations. I would argue that flow and timing is potentially a bigger limitation than discussed. The provider working in the ED had to enroll the patient, perform initial assessment, perform lung ultrasound and then perform second assessment, so there is going to be some bias in this data in regards to timing. However, the difference in time to diagnosis is so great that I feel the results are accurate and reflective of real world. I would’ve liked to see the average or median number of cases enrolled by each provider to prove that even though there were 44 total providers that it was not over-representative of a small portion of super users (i.e. authors of study looking to find LUS benefit). I doubt it but it has happened in other studies.

But, hey, again I’m nitpicking. This is an awesome study and adds to the existing literature showing that lung ultrasound is totally awesome and can give you a diagnosis faster than any other bedside test! I’d love to see the question of how lung ultrasound impacts length of stay and mortality answered!