Unselected Patients and the Prevalence of POCUS Findings 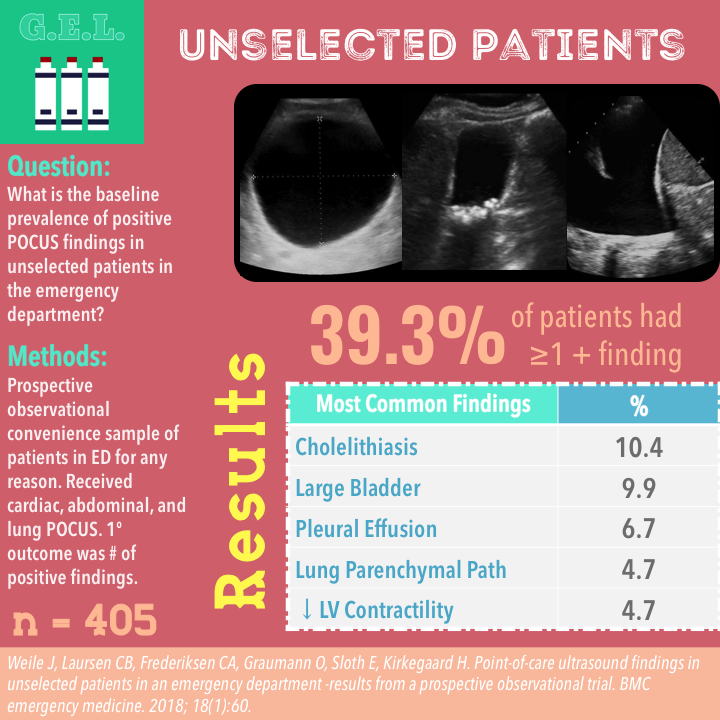 1. Pathology that can be diagnosed by POCUS is common in this population of emergency department patients.

2. We don’t know how much diagnosis of this pathology will change management or outcomes.

3. This study does not provide evidence of benefit for a multi-system “POCUS screen” for any emergency department patient.

This is an interesting article that examines not just one aspect of point-of-care ultrasound, but the whole concept of using POCUS in the emergency department. Their research idea seems to go like this:

Like I said….interesting. We’ll see what they found and then figure out if we can do anything with this information.

What is the baseline prevalence of positive POCUS findings in unselected patients in an emergency department?

Wanted to include 406 (pretty much just made up this number), so they took the same percentages as above and figured out how many of each category they would need, randomized the envelopes, they would then open “ortho” and find an ortho patient entering the department (for an example).

Each patient received cardiac, abdominal, and lung ultrasound. See "The Scan" below.

Single principle investigator - underwent three POCUS courses, had more than 100 scans of each type. Certification by experts in these different areas of ultrasound.

Learn how to do these scans from 5 Minute Sono!

Check out what pathology looks like at the POCUS Atlas!

39.3% patients had 1 or more positive finding

94.5% of views were able to be obtained (surprisingly, focused abdominal was the lowest at 93.2%)

5.9% of patients had simple kidney cysts but those were not counted as pathology

Kappa between study sonographer and experts (random sample of 50 exams) → Kappa 0.87 for pathology versus no pathology

The authors get excited that there are so many positive findings, stating that, “the total potential of POCUS is not fully exploited in everyday praxis”. I think we need to pump the brakes here. Just because they found some abnormalities doesn’t mean that there is potential for benefit. This study is about as far from a patient centered outcome as you can get. There is a lot we don’t know about these findings. How many of those findings were surprising? Without knowing the patients’ medical histories or specific presenting complaint, we don’t know if some of these findings would have been obvious or could have actually changed management. Since many of the findings were gallstones, pleural effusions, or a large bladder - these could easily be inconsequential incidental findings. Of the 218 findings reported in Table 3, gallstones, large bladder (>400 mL) and pleural effusions were the top three diagnoses, accounting for a clean 50% (19.2% gallstones, 18.3% bladder, 12.4% pleural effusion). Therefore, it is not clear how this information can inform our practice, because there is no differentiation between what findings are meaningful and important. This is the reason that all of other studies have targeted only a single population and a specific ultrasound! It’s ironic because in the introduction, the authors basically say, “We want a study in a totally undifferentiated population because that hasn’t been done before”, and in the conclusion, they are saying, “With these results, we need to look at more specific populations and apply the ultrasound in context” (that’s what everyone else has been doing).

Different health care system and population. Big concerns for external validity which would really limit the usefulness of this information for any other population. They note that some emergency department may not see myocardial infarction or strokes because they bypass the ED. Most patient have to see their primary care physician before going to the emergency department, so that may bias population to a more sick cohort as well.

1. Pathology that can be diagnosed by POCUS is common in this population of emergency department patients.

2. We don’t know how much diagnosis of this pathology will change management or outcomes.

3. This study does not provide evidence of benefit for a multi-system “POCUS screen” for any emergency department patient. 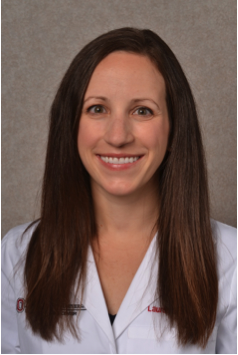 Assistant Director of Point-of-Care Ultrasound and Clinical Assistant Professor in the Department of Emergency Medicine at The Ohio State University.

I agree with the post regarding this article. I do not think the article findings will change my practice. I am not convinced that the study results are externally valid for many reasons - this is a different patient population as compared to what we see and the patient descriptions are so broad (no idea what medical conditions they may have had, no idea what surgeries they may have had - those are factors that may make incidental findings more or less likely so I wish they had been described more fully.