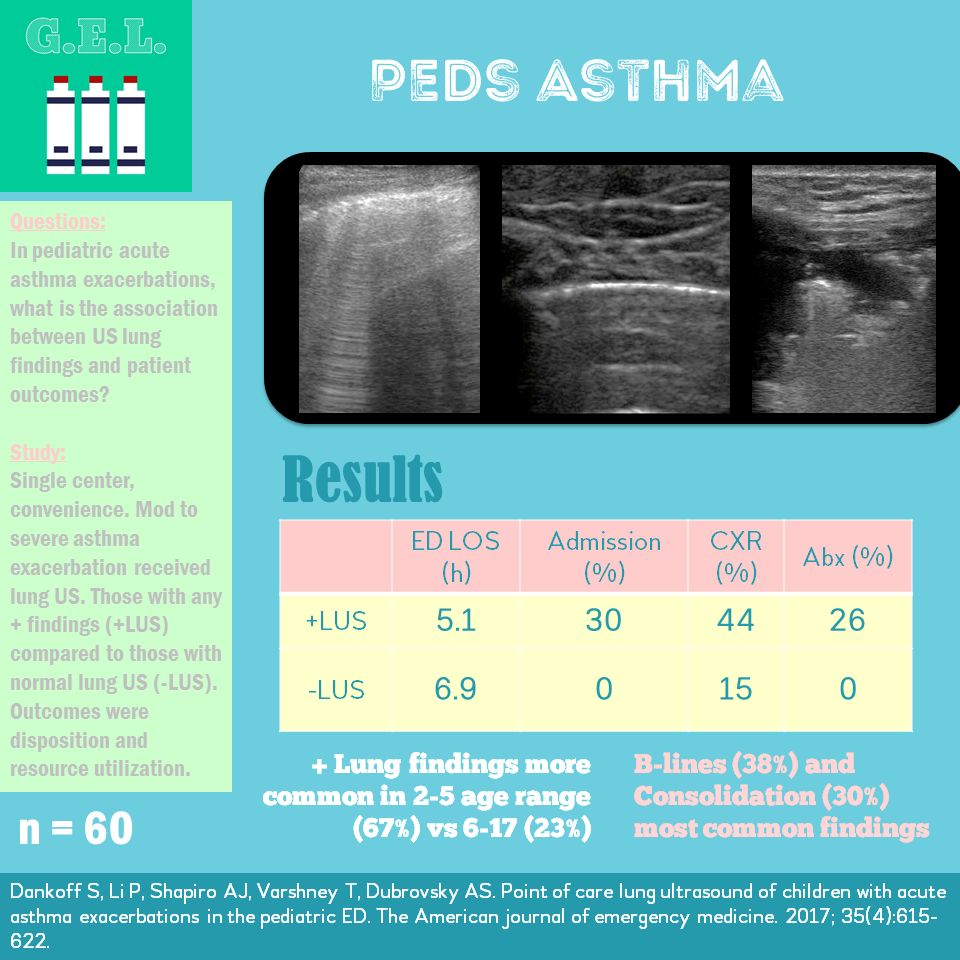 Letter to the Editor and author response

Asthma is common, and in children it is a frequent reason to visit the emergency department. Ultrasound has often been used to evaluate the undifferentiated dyspneic patient, but traditionally - asthma and chronic obstructive pulmonary disease (COPD) have remained a diagnosis of exclusion due to the absence of findings on lung ultrasound. Using ultrasound is all the more appealing in the pediatric population where we try even harder to use radiating imaging sparingly. So the first question is - can ultrasound be helpful in the pediatric patient with suspected asthma exacerbation? This paper looks at using ultrasound in this population to determine what sonographic lung findings might be presents and secondly if these findings are associated with patient outcomes such as length of stay, admission, and resource utilization.

Can we determine the ultrasound lung pattern in pediatric asthma exacerbation?

What is the association between positive lung ultrasound and the final diagnosis, course and resource utilization?

Any of these counted as positive:

Negative = none of the prior, lung sliding, A-lines

Expert’s interpretation was used for analysis

Other information such as vital signs, length of stay, chest xray results, was also obtained

Turned off THI (tissue harmonics), 5 second clips in each zone

5 Minute Sono - How to Scan the Lungs

Most common positive was B=lines (38%)

Kappa 0.93 between study sonographer and expert

Results unchanged when pleural abnormality (majority of which were effusions, 1 pleural line abnormality)

Inexperienced sonographer obtained images but expert interpreted? Sounds like radiology. I don’t like the separation of acquisition and interpretation which is fundamental to POCUS. Fortunately, there was great correlation between the two (Kappa 0.93).

Only 8% had severe asthma (by PRAM) so the population here is primarily those with moderate asthma. So finding on lung ultrasound in mild or severe asthma exacerbations may not have the effects seen here. Similarly, this study excluded chronic respiratory diseases so this data does not apply there either.

There was more fever in the positive LUS group (63% vs 39%) which may have biased some of the other results - antibiotics, admission, chest xray, etc.

Lack of long term follow up. Using only the ED diagnosis is possibly limiting. What if many of the patients with lung ultrasound findings were ultimately diagnosed with pneumonia? Then, instead of thinking that these findings merely indicate a "more sick" population of asthma, it could be identifying an additional etiology of their symptoms. See the next point for more on this.

Were these patients with positive lung findings just a pulmonary infection? The point that these authors seemed to be trying to make is that even if the patient just has asthma, when you find something on ultrasound it means they are sicker (at least had more admissions and resource utilization). However, if these findings are just identifying infection then it would seem obvious that asthma + infection would be more likely to be admitted, get a chest xray, get antibiotics when compared with asthma without an infection. On the other hand, you could draw the conclusion that ultrasound is helping you identify an infection in order to help your management. This paper does not really provide that evidence here based on the design. It is merely saying that these outcomes are associated with the lung findings, not implying that the ultrasound diagnosis caused the providers to do these things (since providers were blinded to ultrasound). I guess at the end of the day, the question is, "when you have an asthma patient, what does it change when you find lung ultrasound findings?". I think the best interpretation would be that you could know that this is a prognostic sign of requiring more resources.