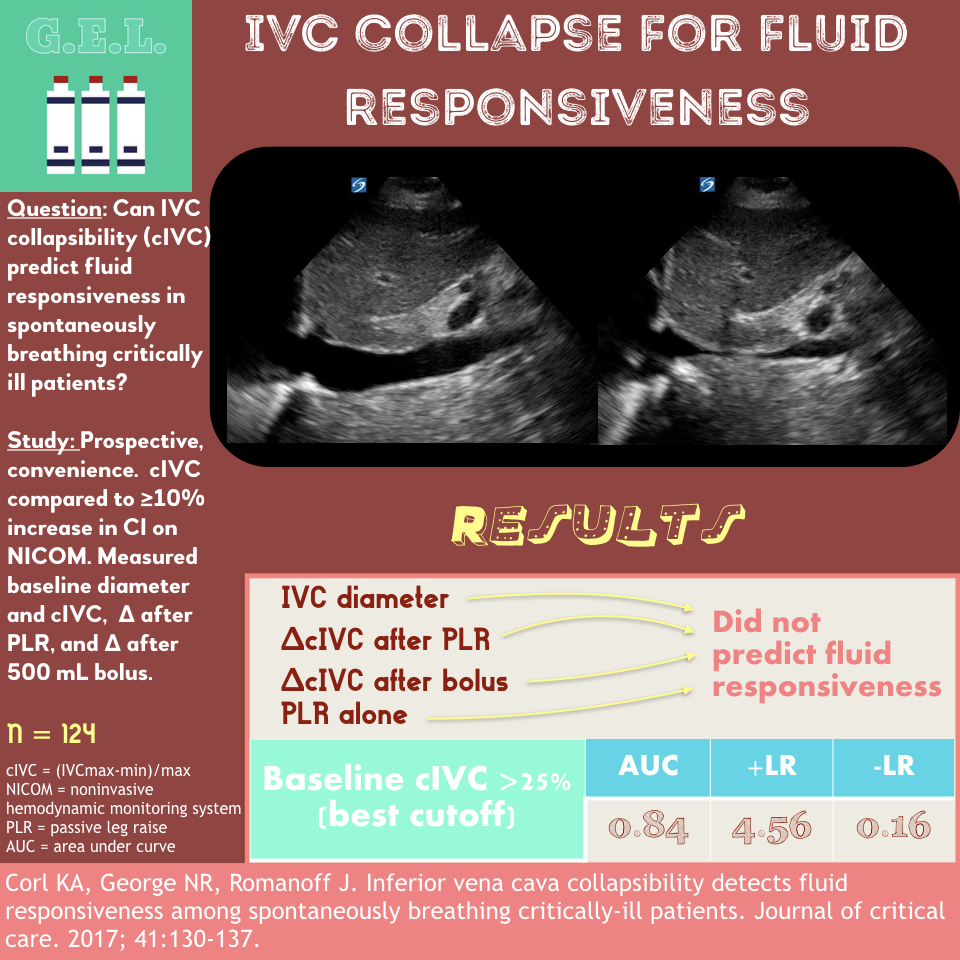 1. In spontaneously breathing patients, an IVC collapsibility index >25% may have some predictability of volume responsiveness, but this data is not sturdy enough to rely on it definitely.

2. This study did not show improved predictability with dynamic measurements or passive leg raise which is contrary to prior literature.

Every patient has an optimal balance where they have just the right amount of volume in their system. It can often be difficult to determine where patients are in that balance based on physical exam and history alone. You don’t want to give a patient too little volume such that their body is not functioning properly, but you also don’t want to drown them by pouring too much fluids through their veins. This especially comes into play with critically-ill patients. Often times, these patients are hypotensive and the question is how much fluids to give. There are certainly invasive and expensive ways that you can try to find this out, but in order to make quick bedside decisions - it would be ideal if ultrasound could help out. We know that ultrasound of the IVC is pretty good in mechanically ventilated patients with regulated tidal volumes, but IVC measurements for fluid responsiveness in the spontaneously breathing has gone back and forth. First it was thought to be useful, then useless, maybe only useful at the extremes - well this paper seeks to figure out exactly how it might be used.

For a good understanding of the terms used and the important distinction between volume status, volume responsiveness, and volume tolerance - check out this great post by @thinkingcc

What is the optimum cutoff for the collapsibility of the IVC?

Acute circulatory failures as defined by

90% power estimate determined sample size of 124 patients to detect difference in AUC (area under the receiver operating characteristic curve) of 0.88 and AUC of 0.70

Clinical and demographic characteristics summarized and assessed for significant differences

Then returned to supine for 3 minutes minimum.

Reviewer were blinded to NICOM results

Training included POCUS (but does not specify to what degree, only mentioning they did not have ultrasound fellowship training)

M-mode not used, only B mode clips slowed to identify maximum and minimum diameter

Learn how to scan the IVC! 5 Minute Sono IVC

79 excluded due to various criteria

Differences between responders and nonresponders in demographics:

Mean IVF of 4060mL prior to enrollment

Max or min baseline IVC did not detect fluid responsiveness

Change in cIVC with PLR did not detect fluid responsiveness

Although decent AUC, not sufficiently sensitive or specific to rule out or rule in

Exclusions! Many causes of shock were excluded, unclear how this would perform in undifferentiated shock population

Poor interrater reliability 0.67 - maybe this is hard to reproduce

Measured with clips and scrolling - not as easy as visual estimation

No patient centered outcomes - does it matter if cIVC predicts changes in cardiac index?

1. In spontaneously breathing patients, an IVC collapsibility index >25% may have some predictability of volume responsiveness, but this data is not sturdy enough to rely on it definitely.

2. This study did not show improved predictability with dynamic measurements or passive leg raise which is contrary to prior literature.

Other Recent FOAMed On this Topic