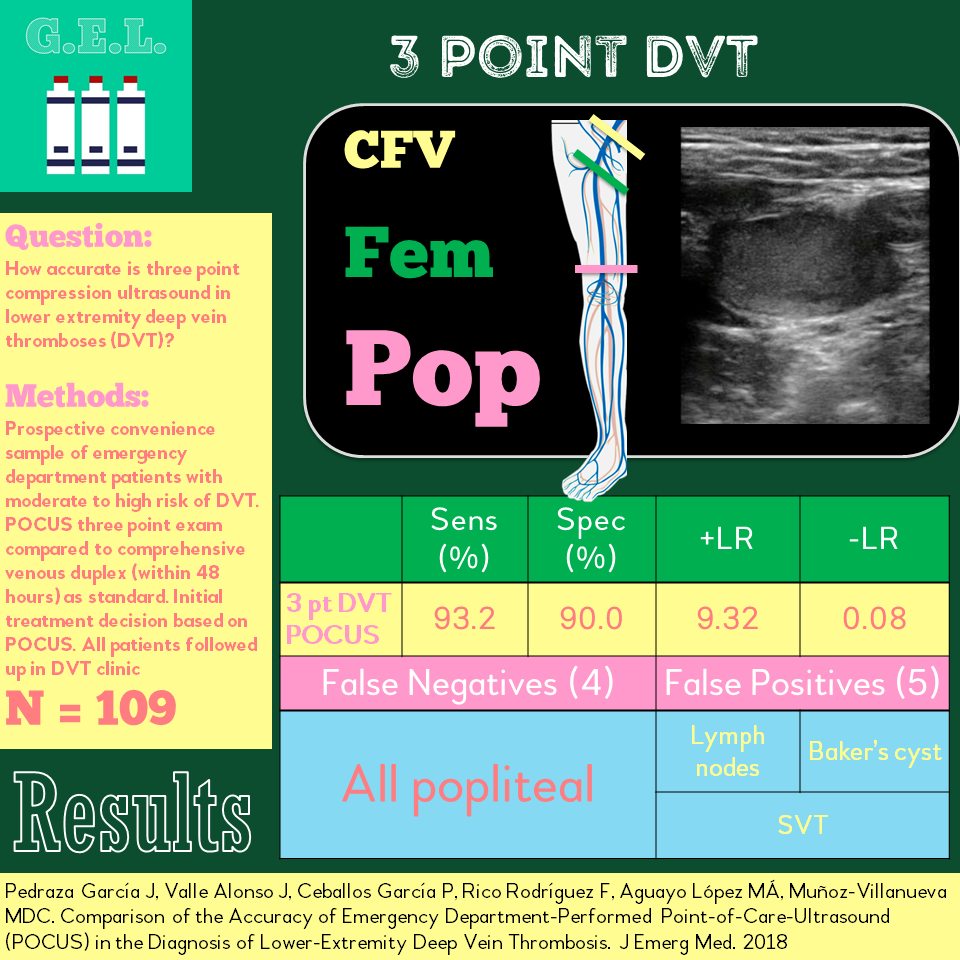 1. Despite adequate training in POCUS, the three point examination is lacking in both sensitivity and specificity in this population.

2. Decision making based on point-of-care DVT exams should take into account the pre-test probability of DVT, the experience of the operator, and should likely include close follow up.

Deep Vein Thrombosis (DVT) is a potentially dangerous pathology that is typically diagnosed by a comprehensive Doppler ultrasound performed by a sonographer. Unfortunately, comprehensive ultrasonography is not always readily available, and patients may be required to return for testing after discharge. This system can result in patients lost to follow up, delayed diagnosis, and unnecessary treatment of patients with blood thinning medications. Previous research has shown that point of care ultrasound can be fairly accurate for this diagnosis, although studies have been mixed. One criticism has been that prior point of care protocols were two-point compression protocols, examining the common femoral and the popliteal vein but not examining the femoral vein. This might lead to a decreased sensitivity and missed DVTs. The current study examined whether emergency physicians could accurately diagnose DVTs, using a point of care, three point compression protocol.

The patient population consisted of a convenience sample of patients over the age of 18 with a suspected DVT who presented to a regional hospital’s Emergency Department in Andalucía, Spain

This was a prospective cross-sectional study convenience sample (only when US trained people, 8am-midnight during the week) and diagnostic test assessment.

Patients with a suspected DVT had a Well’s score calculated and had a D-dimer test drawn.

If low risk by Well's score and a negative D-dimer, they were excluded from study analysis.

All other patients underwent a POCUS exam by the Emergency Physician.

Each patient then had a comprehensive doppler ultrasound exam, performed by an ultrasonographer and interpreted by a radiologist.

The results between the POCUS and comprehensive exams were then analyzed and compared. For the purposes of analysis, an indeterminant POCUS was considered positive.

The exams were timed from when the probe was placed on the patient to the time when the study was completed.

The article provides an algorithm for enrolled patients.

Some notes on this algorithm:

The study population was 11 Emergency Physicians who each had at least 5 years of EM practice after training.

They took part in 3 days US training course that included 4 hours of DVT US instruction.

They then spent 6 months performing the exams in the Emergency Department with interspersed training sessions with radiology.

All had completed >30 POCUS exams for DVT before enrolling patients.

5 Minute Sono - How to Scan for DVT

Free Ibook on POCUS for DVT - all you need to know!

Dedicated training for Emergency Physicians. These physicians probably had more training than some of these other studies.

Confirmatory test occurred up to 48 hours after the initial test, which may affect results. Since treatment was started in many of these patients, who knows if the exams may have changed.

The examiners didn’t examine calf DVTs so this data will not apply to that population.

This only applies to the population with moderate to high risk for DVT. Admirably, the authors did not want to inflate the test characteristics by including many with very low risk for DVT.

Gold standard (radiology duplex) could have missed DVTs as this is not perfect. However, there was pretty good follow up with outpatient appointments and telephone calls.

This study had a lower characteristics than previously reported. In this 2013 metanalysis, most of the studies had better sensitivity and specificity. It is understandable that the sensitivity would be low because the point of care exams are not as thorough as comprehensive sonographer performed exams. What is more concerning is that lack of specificity in the current study. Many practitioners of POCUS are probably used to trusting the specificity of POCUS to rule in the diagnosis of DVT when there is a non-compressible vein on the exam. This study would discourage that with a specificity of only 90%. The problem is that with the lower numbers, even 5 false positives can drop the accuracy significantly.

This study adds to the others on POCUS for DVT that are all over the map in terms of accuracy. It was well performed study, but did have limitations that could be used to justify not believing these results. My guess is that people who thought POCUS was inaccurate will site this as evidence to continue that belief, whereas people who think POCUS is accurate will think they can personally outperform the accuracy seen here. Who do you think is closer to the truth?

1. Despite adequate training in POCUS, the three point examination is lacking in both sensitivity and specificity in this population.

2. Decision making based on point-of-care DVT exams should take into account the pre-test probability of DVT, the experience of the operator, and should likely include close follow up.