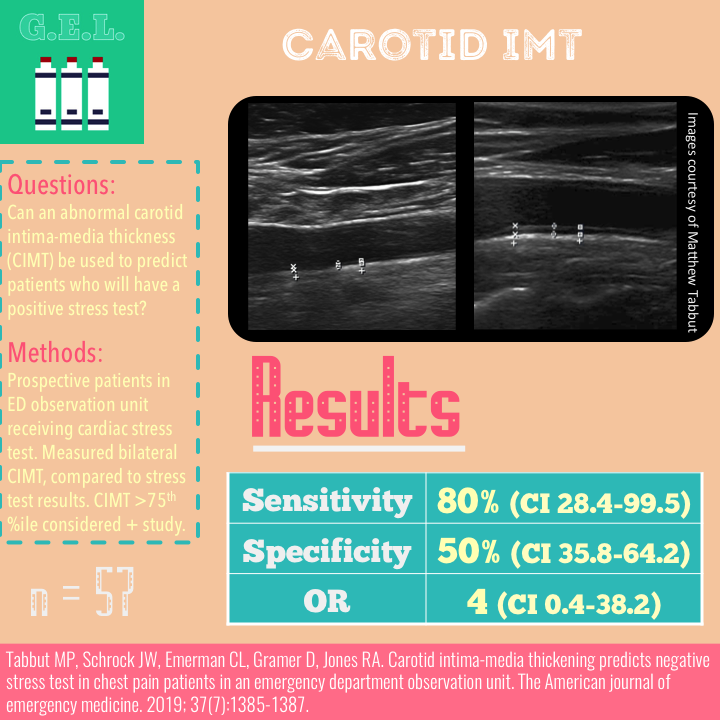 1. Carotid Intima-Media thickness (CIMT) is a novel point-of-care ultrasound measurement that when normal correlates with a negative stress test.

2. Based on the findings of this small study, this measurement is not accurate enough to use in clinical decisions.

Apparently, although it has not penetrated far into the world of point-of-care ultrasound, Carotid Intima-Media Thickness (CIMT), is a thing. The idea is that having more atherosclerosis in your carotids means that you are probably at a higher risk for cardiovascular disease. These enterprising authors thought that this might be a tool to help with stratifying the high number of patients that come to the emergency department with chest pain.

Can an abnormal carotid intima-media thickness be used to predict patients who will have a positive stress test?

Patients came to the observation unit to have stress test

If CIMT was higher than the 75th percentile reference standard based on age, gender, and ethnicity, it was considered positive.

They looked at “positive” two ways: A) the average of either side was high or B) combined average of both sides was high

CIMT was then compared to stress tests, interpreted by attending cardiologists. Indeterminant stress tests were categorized as negative.

One registered vascular sonographer and one ultrasound fellow

CIMT measurements taken on each side of the patient,

Measure 1 cm proximal to the carotid bulb. Average of three measurements used in this study.

For perspective, I also calculated these:

It would have been very helpful to have a better incidence of the baseline risk for these patients. We know that someone thought they were high enough risk that they did not want to send them home right away; however, local practices regarding observations units are variable. More information such as a HEART score would have been useful to understand this population. Notably, there is a rather low incidence of pathology. Only 5 patients had positive stress test. This is likely not a large enough population to draw conclusions from.

Reference standard. Two things here. 1) Stress tests are not the best test to answer the question, “will this person have a major adverse coronary episode soon?”. On the other hand, most places are still using them heavily so they are certainly a relevant comparison. 2) Stress echos, used in 96.5% of these patients, may be less sensitive than nuclear testing for cardiac ischemia on a stress test. An old metanalysis showed that stress echo may be more specific (like 88%) but nuclear stress is more sensitive (but still only 80-88%)

Authors site high negative predictive value (NPV). NPV = [True negatives]/[True negatives + False Negatives]. In this study, since there was such a low degree of pathology, there are going to be very few false negatives (patients who had a normal CIMT but a positive stress test). In this case, the equation is [26]/[1+ 26] = 96.3%. This is why this measurement is highly affected by the population tested.

This is a fascinating idea. Using point of care ultrasound to identify higher risk patients seems like an awesome non-invasive screening strategy, but let's give this more thought. What would the main goal be? If this test DID have a high degree of sensitivity - would we use it as part of a clinical decision to not test further? That could be useful in low risk patients BUT I think it would have a hard time adding a benefit to current decision aids and rapid protocols with two troponins, which are already very sensitive. If the test was very specific, what would we do with a positive finding? We would probably have to get more testing. Similar situation to coronary CT testing - this could lead to unnecessary testing or procedures if we are not careful. Perhaps it would be more useful in an outpatient setting compared to the ED? We just don’t know yet. Obviously, we are a long way from using this clinically, but it is always a good idea to have the ultimate goal in perspective when considering a new test.

1. Carotid Intima-Media thickness (CIMT) is a novel point-of-care ultrasound measurement that when normal correlates with a negative stress test.

2. Based on the findings of this small study, this measurement is not accurate enough to use in clinical decisions. 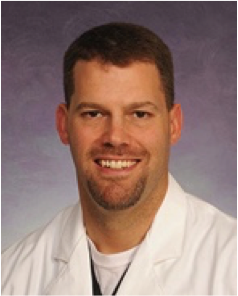 Generally, I agree with the discussion in this post. I would consider this a hypothesis generating, physiologically/anatomically interesting study. No current role in clinical use. Again, it would be good to correlate with more objective measures of ACS risk, maybe a HEART+CIMT score? In a related note, since I generally echo any of these patients, I will note calcification on the aortic valve or at the mitral annulus may have similar implications. This might also be worth further study – and could prove more practical since I advocate doing echo on all of these patients any way to further risk stratify them and identify alternate diagnoses. Not science, just opinions and personal practice. Side comment – I’m not a big believer in stress tests or PCIs for non-ACS patients either (just to disclose my biases).

By Rudy Meijer on 10/25/19 05:57 AM
From the literature we know that abnormal carotid intimal thickening is a strong predictor for the presence of atherosclerotic disease at other locations. But CIMT is only part of the assessment. Go find plaques in the bulb area of the carotid or the femoral and you have the real evidence of the presence of atherosclerosis. No CIMT measurements needed just plaque presence Y/N, take <20 seconds (4-points assessment). Common carotid IMT is more for (pharma) intervention and population studies or to motivate lifestyle change. However, from studies we know that around 60% of 65+ in the western world will have plaque presence at these locations.