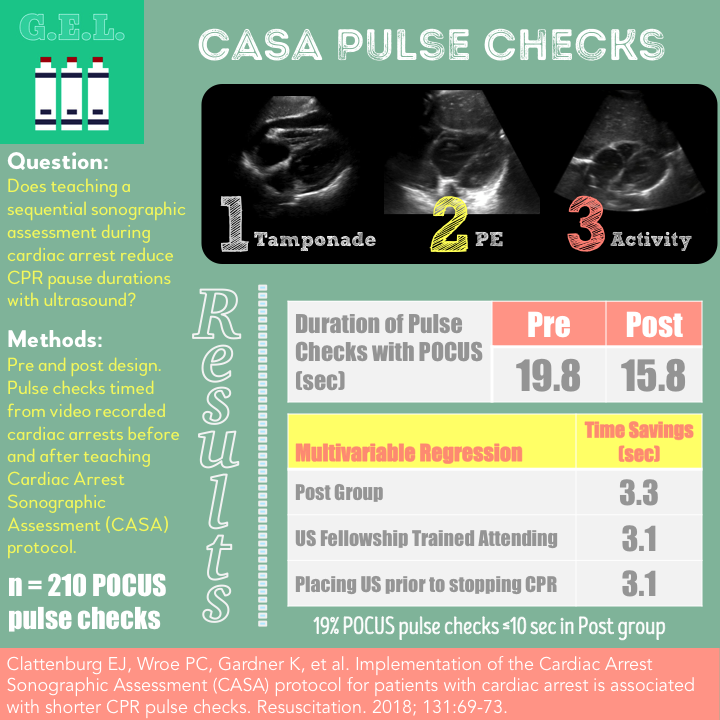 1. This study offers weak evidence that a POCUS cardiac arrest protocol might decrease pauses in compressions associated with performing ultrasound.

2. Unknown whether or not this benefit would have any effect on patient centered outcomes.

3. This supports continued focus on judicious use and careful timing of POCUS during cardiac arrest to minimize potential harms.

As a POCUS celebrity couple, ultrasound and cardiac arrest have a complicated and stormy relationship. First everything is great, and we’re so happy for them. It seems POCUS helps us with diagnosing causes and prognostication in arrest. Then we find out that this practice could lead to increased pauses in chest compressions. Then we find out maybe not everyone agrees on what even constitutes cardiac standstill. Then we say, “well lets just use TEE." Exhausting! Well, perhaps we can start to tackle these problems one at a time. This article uses a specific protocol to try to cut down on the potential for unnecessarily long pauses in chest compressions. If we can decrease the risk of longer pauses, we might be one step closer to keeping POCUS and cardiac arrest in a more stable place (and a safer practice for patients). These authors present their data before and after implementing this protocol.

Does the teaching of the CASA (cardiac arrest sonographic assessment) protocol lead to reduced CPR pause duration with ultrasound?

Initially 2 resuscitation rooms had video capability. 4 in post-intervention period. Recorded "24 hours a day, 7 days a week" but only when turned on.

Collected data for 1 year, timing the pauses in chest compression during which point of care ultrasound was being used.

Primary outcome was difference in CPR pulse check duration when POCUS was performed between the pre and post interventions.

Duration of Pulse Checks with POCUS

Placement of ultrasound prior to stopping CPR - 3.1 second shorter pauses

No association between pause duration and automated compression device, resident year or procedures being performed.

2.6 second decrease in duration of pulse checks WITHOUT POCUS (p = 0.18) between pre and post groups

Pre and post design. The main problem here is that, more than likely, more than one thing changed between the pre-intervention period and the post-intervention period. Ideally, the authors would like to say, “The only difference between the populations was the implementation of the CASA exam; and therefore, the decreased time for pauses was due to the CASA exam.” Fortunately, the pre and post time periods were over a fairly short period of time, so there is likely no huge game-changing cardiac arrest interventions that would differ between groups. However, we don’t know what else could have changed that could have confounded this result.

One concern is that there is no information on how often CASA was used. We don’t even know if the intervention lead to increased CASA protocol use. Furthermore, the time of CPR pulse check duration without POCUS decreased by 2.6 seconds. So maybe 2.6 seconds (15.4-12.8) was saved just based on changes in cardiac arrest management between the pre and post groups. That would weaken the implication that the CASA was responsible for the four second difference between the pre and post groups with POCUS. Therefore, it is really hard to say there is causation here.

Missed a lot of arrests. Pre-intervention 91/129 (70.5%) were excluded because no video or no pause in video. Post intervention much better - only 13/58 (22.4%) excluded. Having more rooms that recorded helped (39 pre, 0 post), but it was more than that. They remembered to record more often (pre 45 excluded because no video recorded, post 7). This makes me think there was more emphasis on recording and collecting the data. This was an unblinded study, meaning that everyone participating knew that it was being studied. There easily could have been a significant Hawthorne effect.

Extra POCUS performed in post group - is that good or bad? There was 62.5% of POCUS use in pulse checks in the pre group and 78.6% in the post group. We don’t know if POCUS was not being used in cases it should have in the first group, or if it was being overused in the second. Too little = maybe missing out on opportunity for POCUS to help. Too much = maybe ultrasound is causing more harm than good. There is probably a “goldilocks” phenomenon of finding the exact right amount of use, but there no real data to suggest what exactly that is. This group is trying to argue that three checks, per their protocol, is the right amount.

The other factors that had impact on pause time are interesting. Placing probe on chest and having an US fellowship trained faculty saved almost as much time as the CASA protocol! It is good to know that these factors are helpful, as they encourage appropriate ultrasound use. As a reminder, the best practices for US in arrest are:

Is a 4 second difference clinically relevant when the pulse checks are (unfortunately) way above 10 seconds anyways? If CASA saves 1 second more than placing the probe on the chest prior to stopping, is it worth it? Of course we all know that we need to minimize the time that the coronary arteries are not being perfused BUT how much time makes a difference? When the mortality of these patients is low to begin with, it would be hard to prove a significant difference in outcomes without (approximately) a billion patients. It was nice that these authors looked at neurologic function in survivors (cerebral performance score of 1 or 2), but unsurprisingly, there was no real difference between groups (5.3% in Pre, 4.4% in Post). We may never get data to prove that there would be a difference in mortality or neuro outcomes, so we may have to continue basing our management on extrapolating data showing that more pauses are bad.

1. This study offers weak evidence that a POCUS cardiac arrest protocol might decrease pauses in compressions associated with performing ultrasound.

2. Unknown whether or not this benefit would have any effect on patient centered outcomes.

3. This supports continued focus on judicious use and careful timing of POCUS during cardiac arrest to minimize potential harms.

Other Sweet FOAMed on this Article

REBEL EM - The CASA Exam: A Follow Up Study

By John Bailitz on 11/02/18 03:15 PM
Su Casa is now Mi CASA. Great Podcast Creagh, Mike and Jacob - Thank you for creating the wonderful resource for our CUS community!

By Mike Prats on 11/05/18 09:42 AM
Thanks for listening John! We really appreciate the encouragement!