Variability in Interpretation of Cardiac Standstill 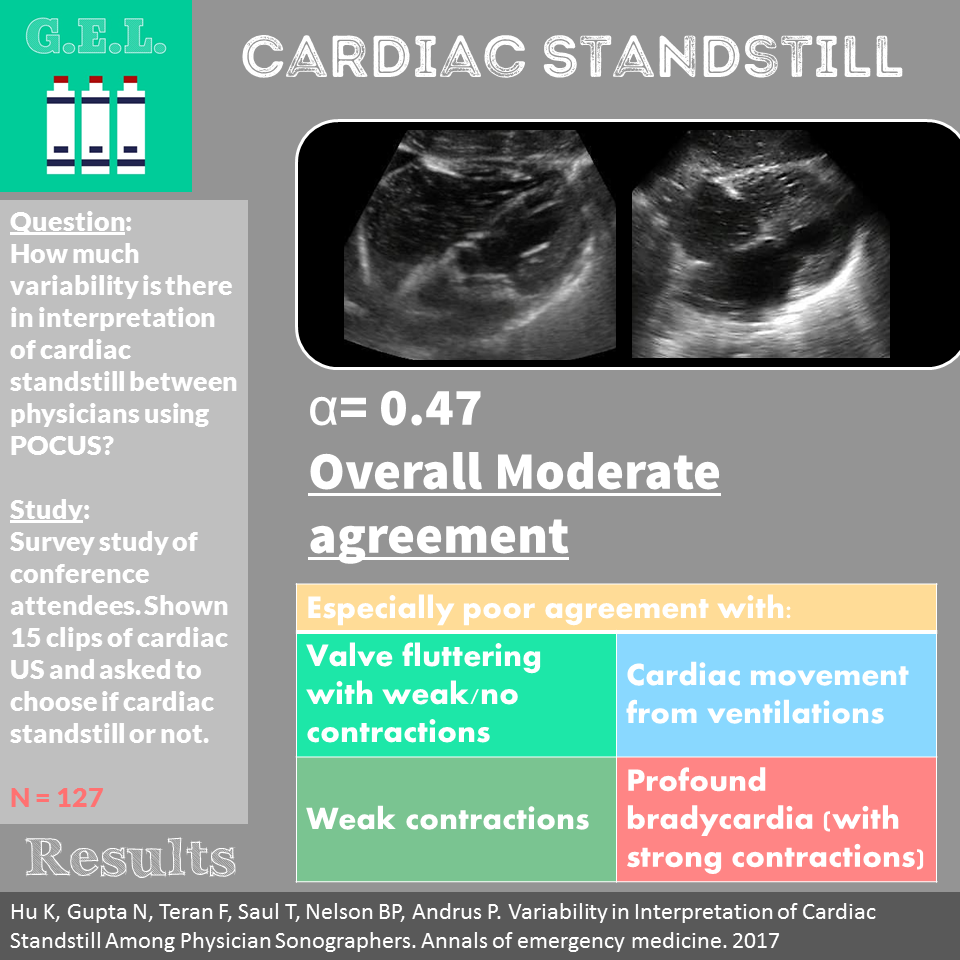 Variability in Interpretation of Cardiac Standstill Among Physician Sonographers

1. There is only moderate agreement in providers determining cardiac standstill.

2. We need more research and education to achieve an agreed upon definition for cardiac standstill that can be used to make clinical decisions.

Ultrasound is used in cardiac arrest for two main reasons. First, to look for causes of the arrest that might affect immediate management (pulmonary embolism, cardiac tamponade) and second, to look for cardiac activity. Finding cardiac activity is a useful prognostic indicator based on prior studies (see REASON trial post); however, anyone who has looked at the echo of an arresting patient knows that often even “standstill” is not perfectly devoid of any cardiac motion. Its important to define what constitutes true cardiac activity and what doesn’t - especially if we are going to use this to “call it” and end resuscitation efforts. This study takes a look to see if there is consistency or a lack there of between interpretations on what we call cardiac activity on point of care echo.

What is the degree of variability in the interpretation of cardiac standstill between physicians using point of care ultrasound?

These were ultrasound focused conferences or rounds

Consisted of residents, fellows, and faculty in emergency medicine, critical care, and cardiology

3) They were then given this prompt “Your patient is a 55-year-old man in cardiac arrest who remains pulseless after 20 minutes of CPR.”

4) Respondents were shown 15 different 6 second clips and asked “is this cardiac standstill or not?”

Other information was collected on:

No ultrasound were actually performed during this study. Pre-recorded cardiac ultrasound clips were shown to participants.

See results for the level of training of these participants.

Based on the images provided - most of the scans shown were done with a phased array (aka cardiac) probe. However, you can also use a curvilinear probe during arrest. Better yet - use TEE.

How to do point of care ultrasound during cardiac arrest by Michael Schick (@ultrasoundstuff and sonostuff.com). Nice, brief, overview.

7 of the clips had particularly bad agreement. These involved clips with:

Respondents had better agreement when there was strong contraction, no contraction, and in the case of ventricular fibrillation.

In the cases with less agreement, there were more missed responses.

Critical care had the worst agreement = 0.40

All subgroups had moderate agreement (except for critical care which was “fair”). Even when looking at more advanced users - not significant improvement in agreement.

Response bias - the people that participated in this study may have had special interest in ultrasound. We don’t know what portion of the population at these conferences we surveyed (no survey response %)

Total of 62% had none or only basic ultrasound skills. There was no difference when testing only the higher level users, though this was a small population. However, maybe those who have less experience with ultrasound should not be using it to make decisions in cardiac arrest termination. Just sayin.

They got 20 seconds to decide on cardiac activity when clinically it may be less time to choose - this could have have altered results in either way. Maybe more concordance as respondents have to make a quick decision or maybe more disagreement because less accurate decisions.

Missed responses occurred more frequently in the clips with worse agreement (total of 5% missed responses). Perhaps the agreement would not have been so bad if everyone had responded. We don’t know.

Disagreement may be worse because they picked difficult to interpret clips. This may not be as common in real practice (or maybe it is more common - hard to say). If there was a greater preponderance of “easier to interpret” cardiac activity in real life, then perhaps disagreement would not be quite as bad as this study suggests.

How much does this variability compare to other variability in ultrasound interpretation? Is this similar to calling cardiac tamponade or right heart strain? Similar to AAA? We don’t really know what kind of agreement we are used to getting by with. What is good enough and what is too bad to trust?

Consequences. Let think about what happens if we erroneously interpret the ultrasound. Scenario A - not calling it cardiac standstill when there is no chance of good outcome. This puts healthcare providers at risk for complications during subsequent resuscitation and takes resources away from other patients. Furthermore, there is the healthcare expense. Scenario B - calling it too soon. This is actually less likely to cause a problem, although the problem, if it did occur, would be a big deal. Currently there is no evidence of neurologically intact survivors with no cardiac activity. Therefore, it is unlikely that you would miss a cardiac arrest patient with little to no cardiac activity who would have survived with a good outcome. There will be the very small percentage of cases where people with very little activity could potentially survive - obviously, it would be bad to stop resuscitation prematurely in this case.

What is the definition of cardiac standstill you use? Write it down in the comment section. Do valves only count? Is minimal contractility enough?

1. There is only moderate agreement in providers determining cardiac standstill.

2. We need more research and education to achieve an agreed upon definition for cardiac standstill that can be used to make clinical decisions.

By Anonymous on 10/23/17 02:14 PM
This is not commented on, but we must not forget to see the whole patient. Is this an elderly patient with multiple comorbidities or a previously healthy young patient? Is this a previously sick heart or healthy one?

By Mike Prats on 10/24/17 08:24 AM
Great point. The decision to continue or terminate resuscitation efforts is a complex one. As with any point of care ultrasound, the beauty of both doing the scan and taking care of the patient is that you can put all of the information together to make an informed decision. Knowing what the heart is doing on echo is another piece of information that can be used to help with that process.