FAST for Hemorrhage from Pelvic Fracture 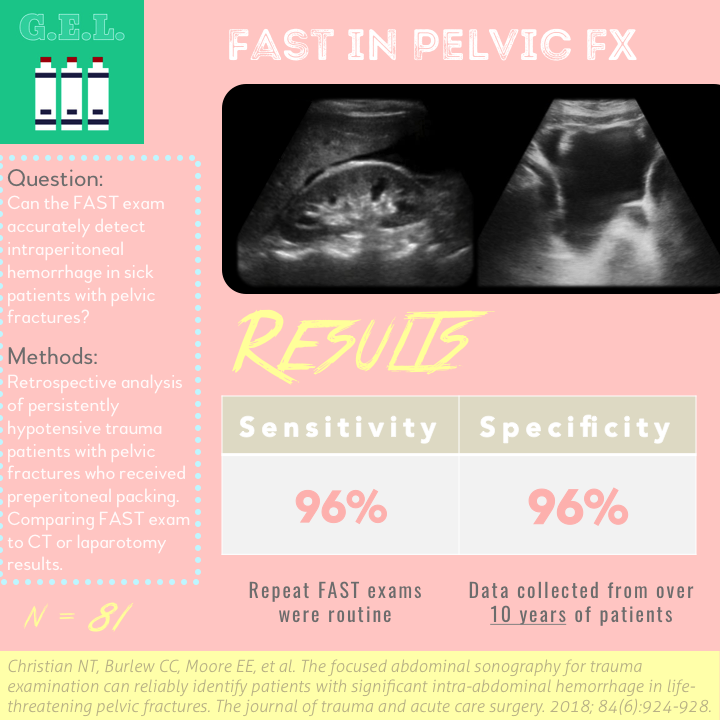 1. The FAST is sensitive and specific for intraperitoneal blood in the unstable pelvic fracture patient.

2. In this population, it's a neat idea that the FAST has the potential to help inform the decision between going to OR, going to IR, or placing REBOA, but this study does not provide significant evidence for this strategy.

The FAST exam has been used in trauma a long time, but oh the times they are a’ changin. A lot has happened since the FAST was incorporated into many trauma protocols. Now everybody gets a pan-SCAN and there are more fun procedures that can be done to help with hemorrhage. Resuscitative endovascular balloon occlusion of the aorta (REBOA) is one of these newer therapies. By percutaneously placing an endovascular balloon, the aorta can be blocked for long enough to control life threatening bleeding. This is still a relatively new technique for non-compressible hemorrhage, but there have been some promising work done. These authors posit that since pelvic fractures with severe bleeding may be best managed by REBOA, perhaps ultrasound can help determine when this would be indicated. They are taking a little bit of a leap here since REBOA is not actually used in their study but the idea is that if there is no intraperitoneal blood perhaps the patient needs something besides a laparotomy. Regardless, they note that traditionally the FAST is not great for hemorrhage in the setting of pelvic fracture (26% sensitive!), so it makes sense to find out how well it works in a sick hemorrhaging population.

FAST considered true positive if intraabdominal hemorrhage on laparotomy or seen on CT. True negative FAST meant no blood on CT or did not require intervention.

The FAST Exam - for this article they did the standard 4 views (RUQ, LUQ, pelvic, pericardial)

Over the 10.5 years of the review, 2,246 patients admitted with pelvic fractures - 132 (6%) in refractory shock underwent PPP. 51 excluded (mostly because they had outside hospital imaging)

False negative (1) - There was one patient with negative FAST that had only palpable carotid pulse (no blood pressure recorded), had negative FAST went to OR, underwent PPP, laparotomy, splenectomy, liver packing.

There were also 4 "maybe could have been" False negatives. In these patients there were positive findings after a negative FAST, but it seems they did not count these as False negatives because there was no intervention.

Single center study with a very specific pelvic fracture protocol. The ultrasound users were likely highly trained (trauma surgeons and ultrasound fellowship trained emergency physicians), so accuracy may not be as good in more novice population of operators.

Retrospective. FAST images could not be reviewed, operative and CT findings based on documentation alone. A lot could have changed over 10 years.

Very small population of overall pelvic fractures because only included those that underwent PPP. These people were very sick, had high incidence of injury, so FAST may not perform as well in different population.

How many of the positive FAST exams were caught only on the repeat FAST? If that is not part of the protocol for other place, may not have this accuracy. Additionally, their definition of positive and negative would lend itself to a higher accuracy. We know that the FAST is more specific than sensitive. They improve sensitivity by counting indeterminate scans as positive. In addition, they allowed positive studies to be positive only on imaging, but for negative studies, they required an operative intervention even if there were imaging findings.

Where were the FAST scans positive? That would have been interesting to see in pelvic fractures. This study seems to follow previous literature that the FAST works best (and was in fact designed for) the unstable patient.

Authors state that since FAST can accurately identify the need for laparotomy, if the FAST is negative but the patient is hemodynamically unstable → might be an indication for REBOA to control the pelvic fracture related bleeding. Would this have panned out well in their cohort? They mention that of the patients with negative FASTs, there was only one that required an intervention on laparotomy. It's an interesting idea, but its way to early to implement this idea. We are barely figuring out the right population who benefits from REBOA. Once we establish that, then we can determine whether ultrasound can help in identifying these patients.

1. The FAST is sensitive and specific for intraperitoneal blood in the unstable pelvic fracture patient.

2. In this population, it's a neat idea that the FAST has the potential to help inform the decision between going to OR, going to IR, or placing REBOA, but this study does not provide significant evidence for this strategy. 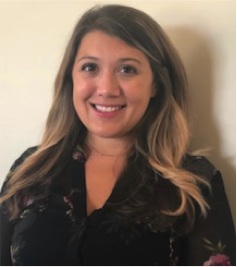 Another win for the FAST, hopefully some of our savvy trauma centers routinely placing REBOA in their hemodynamically unstable and peri-arrest patients will generate some further data in support of this. Bottom line – do the study, repeat it, and be aware of its shortcomings.