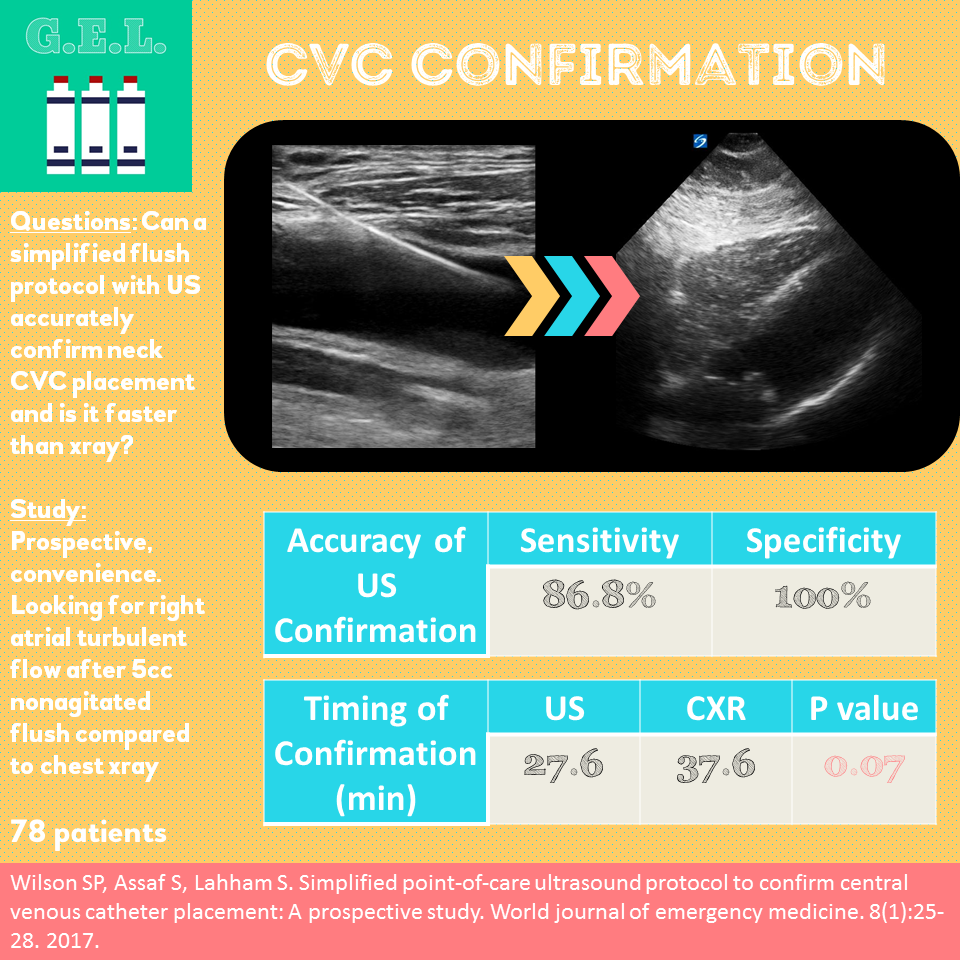 1. A single 5 cc saline push can likely confirm correct line placement when you see flow in the right atrium immediately afterwards. If you don’t see it → could still be okay.

2. This study did not demonstrate statistically significant time difference between ultrasound and chest xray confirmation.

Central venous catheters are a vital tool in the critically ill patient. Traditional teaching after placement of a supradiphragmatic central line is to confirm correct catheter tip location with a chest xray. Point of care ultrasound is now being used to place central venous catheters and also to identify pneumothoracies which are a potential complication of catheter placement. Recently ultrasound has been used to confirm central venous access in lines placed above the diaphragm. The idea is that you already have the ultrasound there from your procedure, so now you just look at the heart, squirt some saline into your line, and confirm that it gets to the right atrium quickly. Some protocol can involves a lot of bells and whistles like finding a three way stop cock, agitating some saline, taking the square root of the volume divided by the body surface area of the patient....okay, I am exaggerating. The fact is that almost all of these protocols are actually pretty simple, but these authors wanted to make it even easier and faster so you have no excuse.

Color or spectral doppler was not utilized (B-mode only) 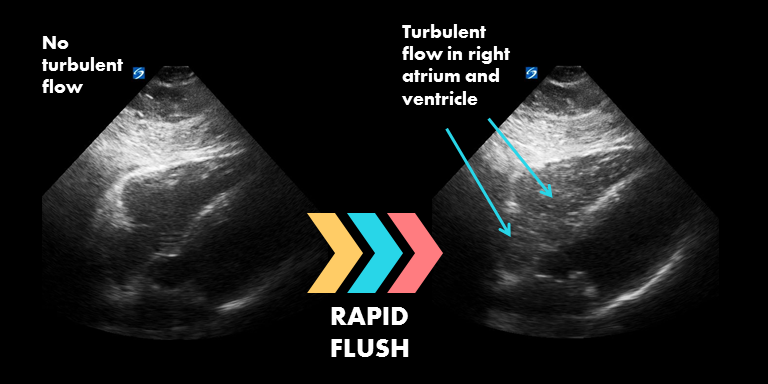 Here’s how you place a central line with ultrasound

Here’s how you confirm it with ultrasound

Test Characteristics for POCUS in confirmation of correct CVC placement

There were only two malpositioned lines in this study (confirmed on CXR) - coiling in the neck and into contralateral subclavian. No turbulent flow seen in either of these cases.

What in the world took so long to do a single view ultrasound? - authors hypothesize that ICU residents not as familiar with ultrasound or may have been “distracted by other tasks”

Robust hospital wide POCUS program at this institution - as usual, the amount of training will affect your results; however, there was no specific training given in this study.

The study sonologists were also the ones who had placed the CVC - could have had confirmation bias based on how the procedure went.

1. A single 5 cc saline push can likely confirm correct line placement when you see flow in the right atrium immediately afterwards. If you don’t see it → could still be okay.

2. This study did not demonstrate statistically significant time difference between ultrasound and chest xray confirmation.

By Anonymous on 04/24/17 02:33 PM
Might overestimate time to u/s confirmation, as you commented. Also, could ve included ecg tracking and exclusion of pnx to fully justify sparing of cxr- one day....

By Mike Prats on 04/25/17 07:22 AM
Thanks for the comment. I agree that in experienced hands - this protocol would take literally 20-30 seconds. Although this study was attempting to make the idea as simple as possible so that anyone could do it, I think that anyone trying to avoid an xray should use ultrasound to 1) confirm wire in vein and 2) check for pneumothorax (both of which were not part of the protocol performed in this study). There is pretty good evidence now that an xray may not always be needed https://www.ncbi.nlm.nih.gov/pubmed/27922877