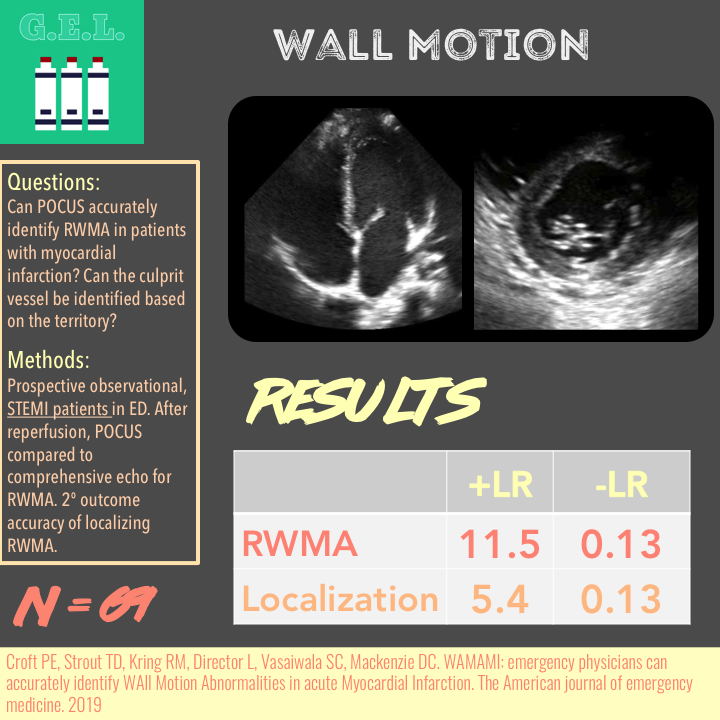 1. Point of care echocardiography is fairly accurate for the presence and location of RWMA in patients with STEMI.

2. More research is needed to explore the accuracy in other populations and patient centered outcomes.

There is no doubt that point-of-care echocardiography can be used for things like pericardial effusion, ejection fraction, right heart strain. However, not all POCUS lovers feel the same amount of confidence in their ability to assess for regional wall motion abnormalities (RWMA). Some POCUS users with extra training are comfortable adding these “comprehensive-like” elements into their point-of-care practice, but many are not. Often times, there is lack of POCUS evidence, so accuracy is extrapolated from the comprehensive echo data. In this sense, we know that regional wall motion abnormalities on echo can help identify patients with acute coronary syndromes. Some POCUS users advocate for its use especially in the NSTEMI (non-ST elevation myocardial infarction) population, where is can be used as evidence to expedite intervention in a patient with ongoing ischemia. This article takes a look at using point of care echo in patients with actual STEMIs - to see how accurate it can be for finding this regional wall motion abnormalities.

Check out The Evidence Atlas - Echo for a review of prior evidence on point-of-care echo.

Can the culprit vessel be identified based on the territory of the RWMA?

Goal was <24 hours between reperfusion and POC echo.

Investigators blinded to clinical information other than known STEMI.

All STEMI patients routinely had comprehensive echocardiograms obtained by cardiac sonographer and interpreted by cardiologist.

If discordance between comprehensive echocardiogram and ventriculogram, the study nearest to the time of the POC study was used as a comparison.

Training consisted of 2 video instructional models regarding identification of RWMA. There was also an online test evaluation for RWMA.

Protocol: For this study, they obtained three views

Learn how to do Cardiac Ultrasound from 5 Minute Sono!

Check out what cardiac pathology looks like at the POCUS Atlas!

75 patients enrolled, 6 excluded (* in two cases, this was because investigators could not obtain interpretable images, others were due to withdrawing from study (2), leaving against medical advice (1), incomplete medical data (1).

There was possible bias in the operators since they knew that these were STEMI patients, but that is not at all different from real life practice where you have some suspicions of what is going on prior to performing a study.

Speaking of operators, the significant variability in the accuracy of operators makes me think this is a pretty operator dependent test. Sure all ultrasound is, but maybe this more than others.

Main one: this study looked at STEMI patients. This was a smart way to do this study because in a population of any patients with NSTEMI or chest pain, there would probably be a fairly low rate of pathology, making it hard to know how good the test was. However, this does present a problem. We are likely not going to use this on STEMI patients. An emergency department echo prior to revascularization is not likely going to change management and may in fact lead to inappropriate delays in care (unless of course you suspect a mimic of a coronary occlusion). Therefore, the authors are trying to make the case that if POC echo is accurate for RWMA, it can be used on those patients who do not meet criteria for emergent revascularization, to help with their management. While this makes sense, we can’t assume that STEMI and non-STEMI patients are the same. Conceivably, STEMI patients might have more obvious RWMA. Or maybe a broader population of patients would be more likely to have other pathology that could mimic RWMA. Therefore, although I agree this is promising in other populations, we have to be cautious with over-extrapolating.

Speckle tracking for wall motion abnormalities (as covered in another great article was not used in this study, but could be a potential way to further improve accuracy of these studies.

So should point-of-care ultrasound practitioners continue to expand the scope of their practice? The scope of many emergency medicine physicians is guided by the ACEP Ultrasound Guidelines which do not explicitly mention wall motion abnormalities or other advanced echo practices. Here is a great article on the use of advanced echo by non-cardiologists: International consensus statement on training standards for advanced critical care echocardiography Intensive Care Med 2014

1. Point of care echocardiography is fairly accurate for the presence and location of RWMA in patients with STEMI.

2. More research is needed to explore the accuracy in other populations and patient centered outcomes. 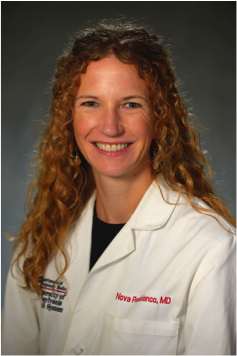