Transesophageal Echocardiography in the Emergency Department 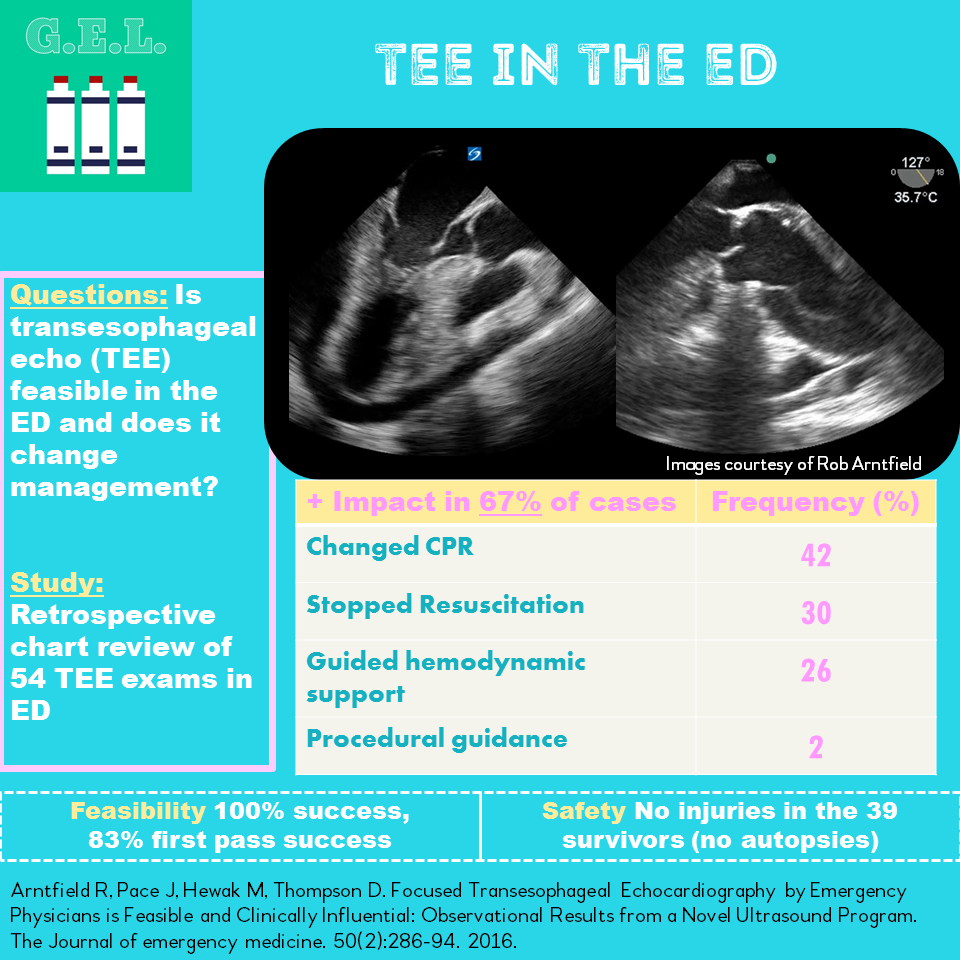 2. TEE can change the management of your patients.

3. There were no complications of TEE in the ED reported in this small retrospective study.

Transthoracic echocardiography (TTE) has proven to be very useful in the emergency department but there are some limitations. These include different experience levels, patients with difficult anatomy or conditions, and logistical limitations such as attempting to scan during ongoing CPR. Transesophageal echo (TEE) can solve some of these issues. It has been shown to be better than TTE in certain situations. Downsides of TEE are lack of training, cost, invasiveness, and current culture (AKA "politics").

Is performing TEE in the emergency department feasible?

Does performing TEE in the emergency department change management?

Queried ED ultrasound database (Qpath) and retrieved data on each scan (entered at time of ultrasound). This included a section titled “recommended action(s) based on findings” The options were:

Attempted to distinguish findings that could have been seen on “basic” TTE as opposed to TEE. TEE specific defined as the findings made by possible by the acoustic window or enhanced resolution (examples given were findings during CPR, ascending aorta, and fine ventricular fibrillation).

Patients received TEE at the discretion of their treating physician as part of their usual care in the emergency department.

All intubated at time of exam

No autopsies were performed on the 15 that died

Clinical Impact (*note: text data vary slightly from data in tables/figures. The latter is reproduced below)

TEE was DIAGNOSTICALLY helpful in 76% of cases

TEE had THERAPEUTIC impact in 67% of cases

The use of the four different views

Mid-esophageal four-chamber was most commonly achieved (98%)

We don’t know how much really could have been seen on TTE because it was not attempted in most patients.

We don’t know if the changes recommended based on TEE were good decisions.

We don’t know the utility in less sick patients (non-intubated).

Limited evidence to support safety given small population and no autopsies performed.

2. TEE can change the management of your patients.

3. There were no complications of TEE in the ED reported in this small retrospective study.

By Anonymous on 02/19/17 08:55 PM
When there is a study showing increased survival with TEE in cardiac arrest, I will ask my department for $$$.

By Mike Prats on 02/20/17 03:43 PM
Thanks for your post. You bring up a good point - this is very early evidence and probably not substantial enough for many to justify a significant investment. However, I wouldn't hold your breath waiting for a TEE vs control trial. There are many diagnostic and therapeutic interventions that are used without definitive mortality benefit. Although having well done RCTs about everything would be ideal, in many cases it is not feasible. A challenging part of the job is weighing risks versus benefits based on best available evidence. This study is just beginning to build the evidence base to show that TEE in the ED might be a good idea.