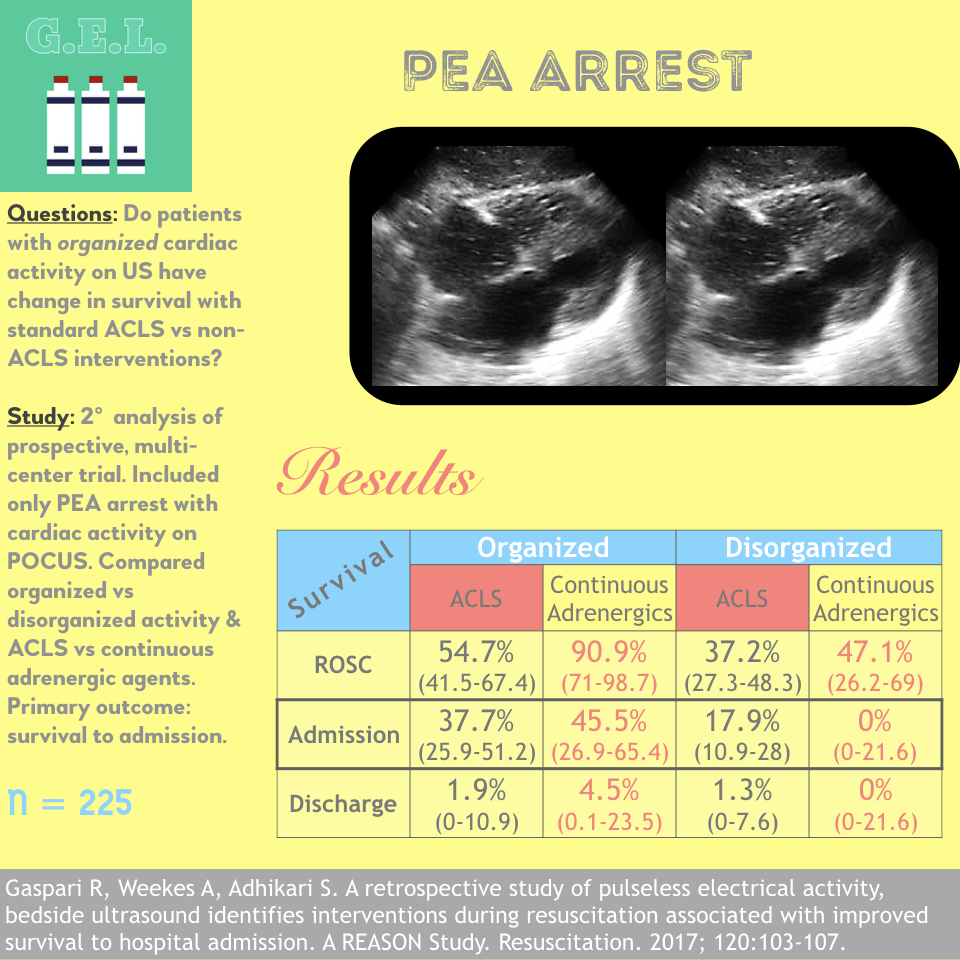 1. Differentiating organized and disorganized cardiac activity with point of care ultrasound is feasible.

2. This distinction may influence survival and response to non-ACLS medications.

There is still not enough known about exactly how we can (or should) use ultrasound in cardiac arrest. There have been studies that show ultrasound can be helpful in two main ways. First, the finding of cardiac activity on ultrasound is associated with increased survival. Secondly, ultrasound can identify causes for the arrest such as massive pulmonary embolism or cardiac tamponade. This paper is asking if we can take these purposes one step further. What if looking at the patients heart with ultrasound can help us figure out what medications will help them best during arrest? The distinction they make is between those with organized cardiac activity on ultrasound compared to those with disorganized activity (some movement but not really meaningful). They take a look at patients in PEA (pulseless electrical activity) and determine if those with organized cardiac activity would have increased survival after certain interventions.

20 sites in US and Canada

Secondary analysis of a prospective observational trial. See our previous post on the REASON trial for those methods.

Patients in PEA arrest were compared in four groups based on two binary characteristics:

Secondary outcomes were ROSC (return of spontaneous circulation) and survival to hospital discharge.

Categorized all interventions to patient during the arrest resuscitation as either:

Interventions only counted between resuscitation and return of spontaneous circulation (ROSC)

Each clip was subsequently reviewed by two blinded interpreters who designated it as not only positive or negative for cardiac activity but determined for clip with activity, whether or not it was organized activity.

Emergency Physicians credentialed in bedside US. No specific training noted.

Remember, it is important to minimize time not doing chest compressions. Record a quick clip, get out of there, and then interpret it later. You are looking for A) If the heart is beating B) Is it beating well (organized vs disorganized) and C) Is there evidence of a cause for this arrest

How to do point of care ultrasound during cardiac arrest by Michael Schick (@ultrasoundstuff and sonostuff.com). Nice, brief, overview.

(Only 170 analyzed for organized vs disorganized)

Comparing differences in characteristics of organized versus disorganized activity patients:

-Other meds given were magnesium(4), thrombolytics (6), and intralipid (1)

No statistical difference between any groups

Interestingly, in those with disorganized cardiac activities - the non-ACLS group lead to higher ROSC, then lower survival to admission, then the same survival to discharge (but none of these differences were significant)

No difference in any group survival to discharge (secondary outcome)

Within disorganized activity group, no significant difference in survival between ACLS group and non-ACLS group

Patients with organized cardiac activity may respond differently to medications such as continuous intravenous vasopressors.

These are associations. Can not determine causality. In other words, just because those with organized rhythm survived more, does not mean that having the organized rhythm is what is responsible for their increased survival.

Losing 24.4% of the population because of uninterpretable ultrasounds could have significantly affected the results.

The same criticisms relevant to the first REASON trial apply here. Most importantly, the lack of neurological outcomes in survivors. We can talk all day about how an intervention might improve ROSC, but that is not that important of an endpoint. Increasing survival to hospitalization is a good start. Even if they don’t survive to discharge, perhaps that extra time is valuable to family or to the patient in some way. Similarly, if this showed improved survival to discharge - that certainly can be important to people. Some people and their families would prefer coma to death. Obviously, what would be ideal is showing that people are not only surviving more, but surviving with good neurologic status. We have a long way to go to get there.

Since this is an analysis of previously collected data, there is no way to tell why the treating physicians started IV adrenergic medications. It would be nice for these authors if the reason they did this was because of what they saw on ultrasound. If not - perhaps there are other variables not accounted for that both instigated their decision and could account for some survival benefit.

Is this sub-categorization practical in real-life? Can physicians not only differentiate yes or no cardiac activity but also organized and disorganized? Two recent articles show potential problems. First - ultrasound already poses a risk of delaying chest compressions and adding another component to the interpretation may make that worse (not that it necessary needs to if people are doing it correctly, but it could be a consequence because that doesn’t always happen). Secondly, there is already sub-par agreement among physicians as far as what constitutes cardiac standstill - I imagine that this added distinction of organization of activity may have similar challenges. Nonetheless, just because something is hard doesn’t mean it shouldn’t be implemented if it helps people. We just need more evidence that it does help people and also that it won’t cause harm.

1. Differentiating organized and disorganized cardiac activity with point of care ultrasound is feasible.

2. This distinction may influence survival and response to non-ACLS medications.