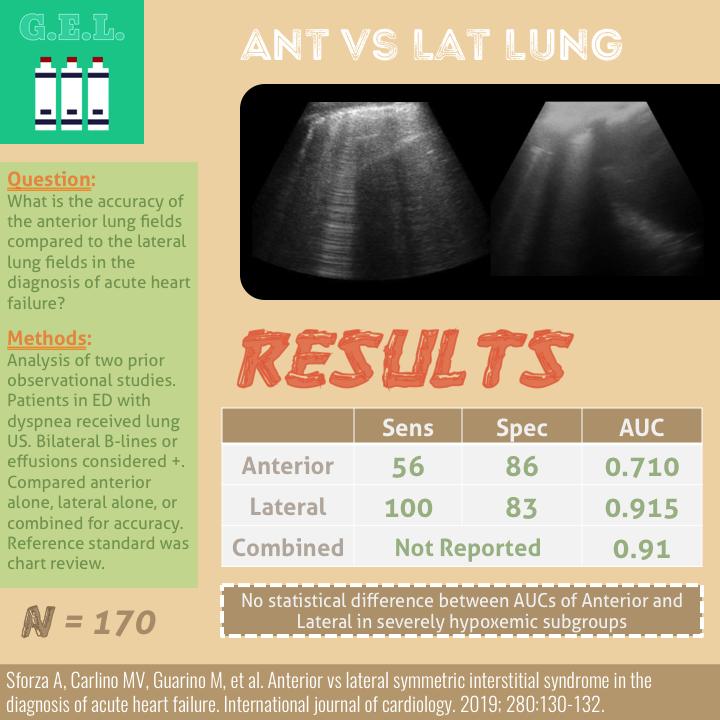 1. Using a lung only protocol that included pleural effusions, lateral lung fields alone had a similar diagnostic accuracy to combined lateral and anterior lung fields for the diagnosis of acute heart failure.

2. Anterior lung fields have worse accuracy, except in subgroups of hypoxemic patients where they are similar to lateral.

3. This study’s protocol had a worse specificity than prior evidence.

Lung ultrasound and acute heart failure go together like peanut butter and jelly. We know that lung ultrasound can readily identify interstitial fluid and can lead to earlier diagnosis of this etiology. We have covered this a bunch. Now many protocols have been proposed, including different areas of the lung and a different quantities of lung areas. These researchers ask an important question - do we really need to scan the whole lung?! Can we save some time and make a more simplified protocol? They compare very limited protocols to more extensive protocols in terms of accuracy for the diagnosis of acute heart failure.

Check out The Evidence Atlas - Echo for a review of prior evidence on point of care ultrasound in heart failure.

Does this change if the patient is more hypoxemic?

These studies looked at patients in the emergency department with dyspnea who had a multi-organ point of care ultrasound performed to determine out the cause (see protocol below).

The ultrasound was performed within 30 minutes of patient arrival. Determined to be a positive Lung ultrasound if bilateral B-lines or bilateral pleural effusions.

PO2/FiO2 (P/F) ratio was used to calculate the degree of hypoxemia. Used severe hypoxia as <200 and critical hypoxemia as <150.

Emergency physicians - “expert” in echocardiography + “good experience” of lung ultrasound. These physicians were not taking care of the patient.

In this study they used a Hand held transducer (specifically the Vscan. When you are looking for B-lines or pleural effusions you generally want a low-frequency transducer (curvilinear or phased array).

All patients in original studies had

In this study they only looked at the lung ultrasound.

Patients were semi-sitting or supine

Learn how to do Ultrasound for B-Lines from 5 Minute Sono!

Learn how to do Ultrasound for Pleural Effusions from 5 Minute Sono!

Check out Pulmonary Pathology on the POCUS Atlas!

In Severe hypoxemia - Anterior was a little improved, lateral a little worse, no statistical difference (p = 0.16)

Integrated ultrasounds were always <3 minutes (30 seconds at most for LUS alone!)

Why were pleural effusions included?! My guess is this is what attributed to the poor specificity, because there are many other etiologies of pleural effusions. It also could have inflated the sensitivity. Other recent studies such as in the Pivetta study, Russell study as well as the Zanobetti study had much higher specificity. The specificity likely also be improved by looking at the heart in some way (whether it be LV systolic function, left atrial enlargement, or E/e’). Unfortunately, we don’t know what either of these changes would do to the overall accuracy. Furthermore, including pleural effusions put anterior lung fields at a disadvantage in this battle as only huge effusions would make it up to the second intercostal space. Although we don’t know how often pleural effusions occurred in this population, it could explain why the anterior fields would be way less sensitive than the latter.

Both of the two prospective studies analyzed in this study used hand held ultrasound. One of the papers included even tested the relative accuracy and found that pocket imaging devices were only okay compared to regular echo (overall K = 0.67). This introduces the possibility that the results could have been better with more traditional point of care equipment. Unfortunately, we don’t know how that would have affected the anterior vs lateral debate.

This study is important because many articles may only include a limited lung scanning protocol. I used to think - pulmonary edema is going to be more in dependent areas of lung. Therefore, I figured that the lateral (aka posterior) views would be more sensitive. However, I also then had assumed that the lateral would not be very specific (especially if using pleural effusions which have many more causes). Likewise, I thought if there was enough interstitial edema to show up anteriorly, that would be fairly specific for acute heart failure. It turns out that although anterior was slightly more specific, the difference was not significant. Now I’m not sure this study was robust enough to end this discussion once and for all, but at least it is something to know if you are limited in your ability to get certain views of the lung.

The hypoxemia piece is interesting as well. Does this mean it doesn’t matter which views we scan in sicker patients? It would have been nice to have a comparison between both anterior and lateral to one or the other in this sub-groups analysis. In sick patients, you generally are more limited both in time and often in your available windows, so it would be great to know what our risk of missing pathology is if we do not do both windows.

So can we safely do less scanning? As usual - it depends on each patient in front of you. What is your pre-test probability for AHF? There is evidence that scanning more lung zones will improve your accuracy. The difference in time cost between a 2 view and 4 view is likely not that important to most people. When in doubt, get the extra views. If you can’t, you might be alright without them.

1. Using a lung only protocol that included pleural effusions, lateral lung fields alone had a similar diagnostic accuracy to combined lateral and anterior lung fields for the diagnosis of acute heart failure.

2. Anterior lung fields have worse accuracy, except in subgroups of hypoxemic patients where they are similar to lateral.

3. This study’s protocol had a worse specificity than prior evidence. 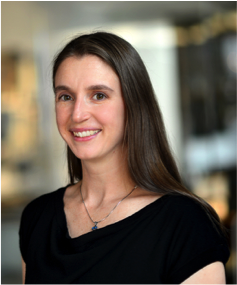 Including pleural effusions as part of a +LUS may have been the major factor driving down specificity of the anterior lung field scan for diagnosis of AHF. I’m still a huge believer in the idea of LUS identifying severity of interstitial syndrome in the wide spectrum of disease severity that is AHF. In my clinical experience, when a patient is sucking wind and significantly hypoxic in AHF, I’m way more likely to see B lines in the anterior lung fields than in my average less severe AHF where I’ll see them isolated to the lateral/inferior lung field. I’m reaching a little bit, but I think this study speaks to the use of LUS in determining severity of AHF in patients arriving hypoxic to your ED. Have to love a study that will help you say your sickest patients are sick from AHF within 30 seconds! Priceless. Love this angle on LUS – it helps further define how LUS can be used in AHF but will require additional research specifically geared toward answering this question.