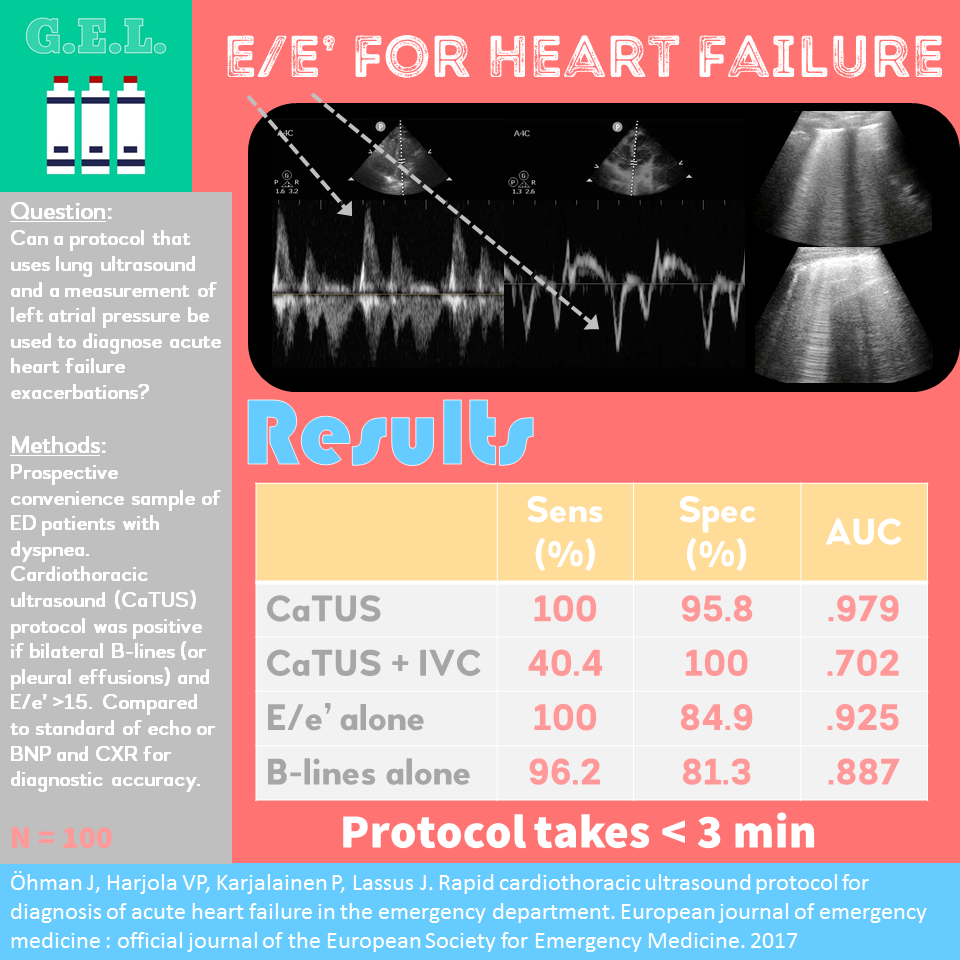 2. The combined lung and echo protocol in this small study had 100% sensitivity and 98.5% specificity for diagnosing acute heart failure, but limitations include a poor gold standard and lack of blinding.

We’ve covered ultrasound for dyspnea and also for acute heart failure before. We know that ultrasound is good for this. It can help make the diagnosis in less time and seems to be more accurate than many traditional diagnostics (chest xray, serum BNP). What this article brings to the table is the addition of diastolic measurements in the assessment of suspected acute heart failure exacerbation. The idea is that not all heart failure has systolic dysfunction, which is the finding usually included in focused heart failure protocols. What we care about in the acute setting is any type of heart failure (systolic or diastolic) that leads to the development of pulmonary edema. Pulmonary edema in heart failure usually develops when the left atrial pressure gets too high. The ratio of the E wave to the e' wave can estimate the left atrial pressure and is fairly accurate even in irregular rhythms. These authors surmised that by adding the E/e' estimation of the left atrial pressure to the evaluation of the acutely dyspneic patient, it might improve the accuracy of the exam. I guess we'll find out.

How accurately does a cardiac and lung ultrasound protocol including measurement of left atrial pressure diagnose an acute heart failure exacerbation?

The gold standard for the diagnosis of Acute Heart Failure (AHF) was defined as meeting one of two criteria:

CaTUS (cardiothoracic ultrasound) protocol was initiated immediately after arrival to the ED (before further investigations). See “Scan” below for details.

All patients had serum BNP

Most also had chest xray (96%) - unclear who determined if CXR was performed. Presumably treating physician.

Single experienced sonographer with >1000 examinations of echo and lung ultrasound (possibly a cardiologist?).

Learn about B-lines on 5 Minute Sono!

In comparing Acute heart failure (AHF) and Non-Acute Heart failure (Non-AHF) patients, there were several differences between populations. A BNP > 400, bilateral B-lines, bilateral pleural fluid, E/e’, IVC index, and congestion on CXR all were significantly different between the groups. BUT that is because echo, CXR, and BNP were used as gold standard! However note:

Interestingly - there was no statistically significant different in LV EF in AHF vs non-AHF (42.4 vs 51.8%). This seems to be in contrast to the accuracy of other protocols that utilize systolic dysfunction to diagnosis acute heart failure. This paper we reviewed found systolic dysfunction and bilateral anterior B-lines to be 100% specific.

100% interobserver agreement for +LUS. For E/e’ there was a mean inter-observer coefficient of variation of 9.99%.

30 patients were referred for a review by cardiologist (blinded to clinical information) - 95.8% sens, 97.8% spec

AUC for E/e’ identifying B-lines on lung ultrasound was 0.95

A group of hypertensive AHF patients had IVC index of 0 which brought down the accuracy of adding the IVC.

Gold standard is not ideal - just having disease on echo does not imply causality for symptoms. Secondly, BNP is known to be a pretty bad test for acute heart failure (see First 10 EM post and EMNerd post). CXR is probably less good than ultrasound for picking up pulmonary edema so that is also a poor standard.

Skilled operator. Lots of scans. Not everyone would be comfortable calculating E/e’, although other emergency protocols have used this and shown it to be feasible.

Single center outside the US. Small study.

Excluded patients without good window and those with interstitial lung disease.

Sonologists in this study were not blinded to clinical presentation or vital signs → may have introduced some bias.

There are two main issues here. The first, is this even feasible to implement in the emergency department? I think the answer to this is - sometimes. In the acute crashing patient - probably not. You need to have a decent apical four chamber window to get these measurements. It does take some additional training, because these doppler measurements are angle dependent. It will clearly be intimidating to many people, but it is not as complex as it sounds. This article does not do much to prove general feasibility since it was a single skilled operator in Finland (who may or may not be a cardiologist). The other aforementioned study seem to indicate that this is feasible to accomplish in the emergency department within a reasonable amount of time. I think it will take some training and convincing, but I don't think that this alone would be prohibitive.

The second problem is that the flaws in this study call into question the impressive accuracies these authors found. As mentioned above, the main two problems are the gold standard used and the lack of blinding. Although this study is thought provoking, I think that these limitations might prevent me from trusting the accuracy of measuring the E/e' in the diagnosis of acute heart failure. What's your take?

2. The combined lung and echo protocol in this small study had 100% sensitivity and 98.5% specificity for diagnosing acute heart failure, but limitations include a poor gold standard and lack of blinding.

By Mike Prats on 05/02/18 09:28 AM
Great question Joshua. E/e' >15 seems to be a good cut off for abnormal LV filling pressure. A good resource for this is the American Society of Echocardiography guidelines for left ventricular diastolic function assessment. It is quite thorough but has a lot of great information. Check out Table 3. http://asecho.org/wordpress/wp-content/uploads/2016/03/2016_LVDiastolicFunction.pdf